Living in the Boston area gives me an incredible window into the U.S. Presidential election. Since Boston is less than an hour’s drive from the New Hampshire border, candidates with deep pockets advertise on television here in Boston hoping to influence the first in the nation primary voters who have access to Boston TV. My hometown paper, the Boston Globe has extensive coverage of the primary race.

But the most fascinating aspect of the NH Primaries is the remarkable access that an ordinary citizen has to the candidates. It’s not difficult to meet them, ask a question, and perhaps pose for a selfie. Heck, if you are determined, you can even get a photo of every candidate holding Dino Flintstone. Being a civics geek with a deep interest in the marketing aspects of the U.S. Presidential election cycle, I enjoy attending primary events.

Considering I personally speak at some 40 live events a year and am always looking for ways to engage an audience myself, I've enjoyed taking a critical look at the campaign events.

This is a detailed post offering my marketing observations on the New Hampshire primary as a result of having participated in candidate events with Hillary Clinton, John Kasich, Marco Rubio, Bernie Sanders, and Donald Trump. I am not offering political commentary here, just some marketing and PR thoughts.

The most important lesson I learned: While each candidate is focused on both online and offline marketing, there is a missing element of packaging the physical and the virtual together to generate even more attention.

Real-Time Campaign Engagement (or not) 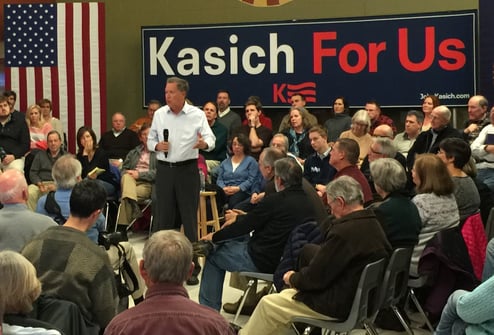 What I found interesting early this cycle is that Donald Trump has done an amazing job with real-time communications and that’s one reason for his surge in popularity in the months leading up to New Hampshire. In my analysis from August, Donald Trump Winning the Social Networking Primaries in a Landslide, I showed how Trump has a better command of social networking than any other candidate. At that time, he had four times as many followers on @realdonaldtrump Twitter as any other candidate and he tweeted much more often.

Trump has continued to dominate since I first wrote about him. He is much more likely to comment than other candidates in real-time on what was happening in his world. His Twitter commentary is picked up by mainstream media which generates even more attention. In a strange way, Trump is successfully newsjacking the other candidates. This approach seems to have worked for Trump while Jeb Bush’s focus on massively expensive advertising hasn’t moved the needle on his poll numbers.

Yes, every candidate has a decent Website and basic social networking including Facebook and Twitter. But most aren’t serious about their social presence. They merely do it as a check box because they have to. While the other candidates tweet well-researched positions designed to appeal to as many people as possible, Trump doesn’t mind offending while he says what he thinks. In a world where big brands control messages, authenticity wins, and that’s part of the reason Trump has been so far out in front in the polls.

Meantime, candidates like Hillary Clinton, John Kasich, and Chris Christie are playing a slow and methodical ground game. Kasich, for example, just passed his 100th town hall event in New Hampshire. Their strategy is to meet as many New Hampshire voters as possible. In contrast, Trump has staged a few large rallies and relies on mainstream media to get the word out.

Engage with Supporters at Events on Social Networks 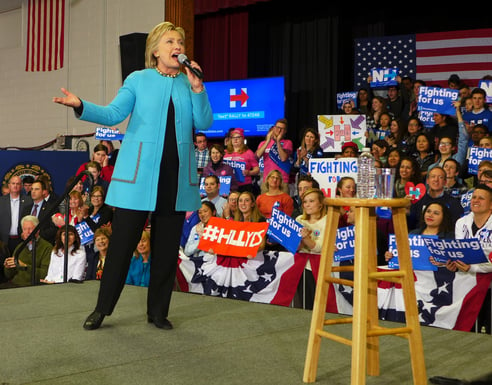 At every campaign event I’ve signed up for, I’ve been asked for my name, phone number, email address, and home address. Once I actually entered the event venue, I was often asked for the same information a second time. Yet, no candidate wanted to know my Twitter ID - @dmscott - where I have more than 120,000 followers. That seems like a missed opportunity.

While every candidate urged the audience to “talk to your friends and neighbors” and “help get out the vote” at events, nobody encouraged us to share our thoughts on social media. That seems like a glaring error.

At both Clinton event I attended, just before the candidate walked onto the stage, there was a message on the big screen saying “Text RALLY to 47246”. I was psyched for this because I thought they might be pointing me to a place where I could interact while she was speaking. But it seems to just be a way to collect phone numbers. Sure enough, I got an annoying call a few days later.

Simply slapping a mobile marketing approach to old school campaign tactics misses the new ways to use these tools.

Candidates could have had a social sharing plan unique to each event. This could be a dedicated page on Facebook where a bunch of photos shot by a campaign staffer would be available immediately after the event. Many who are at the event would likely share these “social media ready” photos of the candidate with voters.

Or what about a #hashtag for each event where people could share what they were seeing live on Twitter? A staffer could live tweet what the candidate was saying and post photos ready for a re-tweet. The cost of this staffer for the entire campaign would be less than just one of the dozens of television commercials that the mainstream candidates have been running. Seems like a good investment to me.

The closest thing to this kind of link from an offline event to online social networking was an email thank you note the Trump campaign sent me after I attended a rally. It contained a photo of the event I attended, which was a nice touch. But it was conspicuous in not including social share buttons so people could say “I was here” and automatically post the photo to social networks. Another missed opportunity.

Integration of online and offline marketing will be the next frontier in U.S. presidential campaign marketing

In 2003, the Howard Dean campaign pioneered blogging as a Presidential campaign tool which I wrote about at the time and he rose from nowhere in the early primary states. In 2008 and again in 2012 as social media exploded in popularity in the U.S., I wrote about how Barack Obama was by far the most engaged candidate on social networks and it won him both elections. In this cycle, Donald Trump has extended Obama’s focus on social media to become the most engaged in the real-time media aspect of Twitter and that's generated tons of media coverage.

Missed opportunity: In 2016, nobody has managed to figure out how to take the massive investment in traditional campaign methods like town hall events and television advertising and integrate them with a focus on social networking.

Marketing observations about each candidate’s event 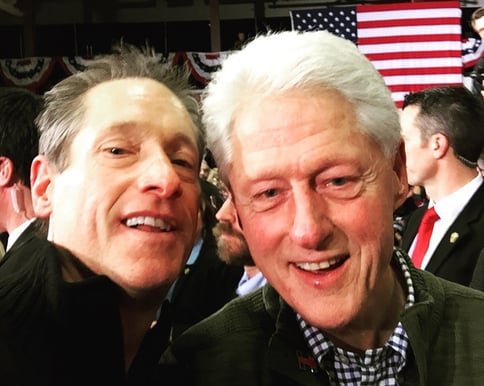 We arrived about an hour before the doors opened at the final Clinton campaign event of the New Hampshire season last night in a raging snowstorm. We fully expected to wait outside and were dressed appropriately but in a nice touch, the campaign had set up snaking lines inside the school hallway. We were about 20 people into the line so when we finally made it through the Secret Service checkpoint when doors opened we were delighted to find ourselves standing right on the rail, just a few feet from the stage. Clinton has many people who have endorsed her candidacy so having a chance to see Senators and Governors and even the "Big Dog" himself Bill Clinton as “warm up acts” was fun. After the event, I got selfies with both the former President and the candidate. In an interesting marketing skill I hadn't seen before, Hillary Clinton is incredibly fast at taking selfies. Unlike other candidates who let audience members fumble with their phones, Clinton takes them herself in about 4 seconds flat each. This unusual move ensures that everyone who wants a photo gets one to share on social media together with the story that Hillary Clinton herself took it. Brilliant.  I liked that Clinton's was the only event with a sign language interpreter, showing her focus on inclusion. The Clinton campaign was the only one who telephoned me after the event. I’m not a fan of having sales calls on my mobile phone, so I blocked the number. With the vast majority of U.S. citizens registering for the "do not call" list, phoning potential voters seems counterproductive to me.

Having done more than 100 town hall style events, Kasich has the format down. He’s excellent at engaging with the voters who ask a question and digs down deep to answer without resorting to just repeating messages. One thing I really liked was that Kasich was the only candidate who refused to comment about other candidates. Even when asked by a voter to compare himself to others he refused. I've always liked the marketing tactic of resisting the comparison thing. We're "better, faster, cheaper than the other guys" is a tough marketing road for any product. While I registered for the event with my email address, I never again heard from the Kasich campaign with any follow-up information.

The Rubio event was the only one that did not feature prominent political supporters serving as a warm up for the candidate. Considering we were in the room (with hundreds of us standing) waiting with nothing to do, it seems that having other speakers instead of an endless loop of country music would have been a nice touch. It’s gotten me thinking – does Rubio have any prominent supporters? I liked the Rubio campaign's email followup. It was personal and appropriate, opening with this: Thank you for attending Marco Rubio’s town hall in Bedford yesterday. Tomorrow, when you cast your vote, remember this quote from Marco, “this is not just about who you like, it has to be about who you trust and who will win.”

With my wife and 22-year old daughter, I caught Sanders at a Democratic Party event that also featured Clinton and other speakers. In the car ride, our daughter talked about how Bernie Bros are harming his campaign. I hadn’t heard this term before so she explained that these are Sanders' online supporters who harass people who have differing opinions. I thought our daughter was exaggerating. But once at the event, I was shocked to encounter a gaggle of Bernie Bros in the flesh. Dozens of young men were shouting down other speakers, booing loudly during talks, aggressively approaching people in the hallways, and generally being totally disrespectful. Marketing by intimidation is not cool. Bernie Bros are harming Sanders a great deal and Sanders knows it. But will he disown this subset of his supporters?

The Trump event was the best organized of the ones we attended. His supporters and the simply curious who attended were surprisingly polite and well-behaved (unlike those of Bernie Sanders).

On to South Carolina

I’ll be watching the cable news commentary tonight to see who prevails and I’ll be following the remainder of the primary season with great interest. However, there’s nothing like being in the room and I’ll miss the access I’ve enjoyed in New Hampshire.

Important note: This is a marketing blog, not a political blog. I am not commenting on any candidate’s views on the issues nor am I providing my own views on the issues nor my choice of candidate. I write about the US Presidential election because it is a massive marketing case study playing out for several years, not because I use this blog to support any candidate over another.

All photos by David Meerman Scott