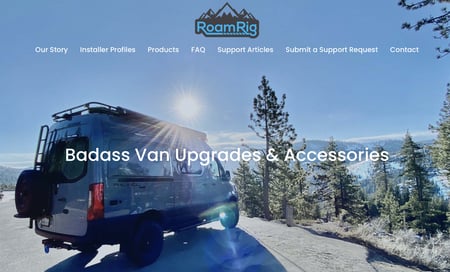 A great way for organizations of all kinds to engage with interested people is to join and participate in a Facebook group. Facebook groups are a place to communicate about shared interests with like-minded people. Many groups are private, which fosters a sense of community.

Here’s an example that appeared in the 8th edition of my book The New Rules of Marketing and PR to get you thinking about how to effectively participate in Facebook groups.

Aaron Silidker is owner and CTO (chief tinkering officer) at RoamRig, a company that installs lithium battery power systems in camper vans. Silidker participates in several camper van Facebook groups but is particularly active in one called Winnebago Revel. As of this writing, the group has some 15,000 members.

It’s a members-only group, but requests to join from people who own vans are generally accepted without conditions.

“I realized there is a lack of real engineers working on the electrical systems of camper vans,” Silidker says. “So I decided to create a company to focus on this niche. We currently work exclusively on the electrical systems for one model camper van, the Winnebago Revel, so I like to say my business is a niche within a niche within a niche. The Winnebago Revel group on Facebook is a perfect place for me.”

Because Silidker has deep knowledge of the Revel’s electrical systems, he answers any group questions related to operating, maintaining, fixing, or upgrading those systems. Silidker also owns a Revel himself, which gives him credibility. It also means he can post photos or videos of his van to illustrate details when posting. 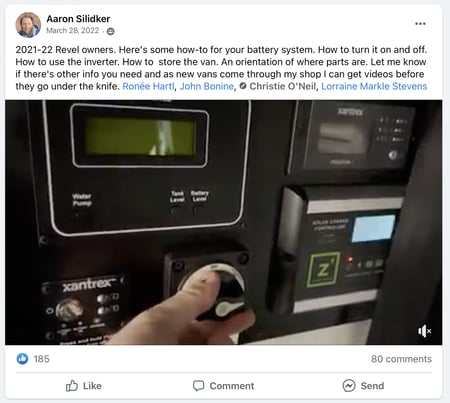 “When people have a problem that’s frustrating to them, I genuinely enjoy helping them solve it,” he says. “The commercial aspect of what I do allows me to really dive deep into the intricacies of how the systems work. It’s a snowball effect. I’m helpful, and that allows me to make a good living and that makes me want to be even more helpful. The more work I get, the more I learn. And I can be even more helpful with that knowledge.”

Camper vans like the Revel use specialized batteries to power the lights, heating and cooling systems, and water system pumps for when the van is parked at a campsite. Silidker’s upgrades make vans’ electrical systems more efficient and last longer between charges.

“There are a lot of myths about how camper vans work and specifically how Revels work,” he says. “The electrical systems seem especially mysterious to people. I bring logic to the Facebook group discussions. Whenever I can, I break those myths.”

Each year, many Revel owners travel to a meetup called the Revel Rally. Silidker drives several thousand miles from his Connecticut home to attend. “I meet many of the owners,” he says. “I answer a ton of questions and even help some people fix their vans at no charge. Nearly everyone there is a member of the Facebook group, so attending helps me be accepted by Revel owners.”

Over the years, Silidker has earned a reputation as somebody who is helpful and trustworthy. He answers questions within the Facebook group, responds to questions sent via private messages, and even conducts private video chats with people having trouble with the stock electrical system—even non-customers.

Here are just a few comments about Silidker members have posted in the Facebook group:

In mid-2021, he was voted the most helpful person in the group by its members.

This reputation leads directly to people reaching out to him to purchase his electrical system upgrades, priced at $10,000 or more. “People in the Revel group know that I have a reputation for a deep understanding of electrical systems, so anyone who wants to upgrade will contact me.”

His business has become so successful that Silidker now works with certified installation partners located throughout North America. “I look at them as extensions of RoamRig,” he says. “Clients pay for my system through me, and then the installer located nearest the client works with the client to schedule and perform the work. It’s fixed price for the client and the installers. I get photos and test reports from each installation to make sure the work is done to my standards.”

Participating in Facebook groups can benefit any business. but It’s especially powerful for niche businesses looking to connect with information seekers. The key is to assume a helpful posture. Follow Silidker’s lead and avoid trying to sell. Post often, and answer any questions you can.

“The reason participating in Facebook groups works so well in the camper van world is because people with deep subject matter expertise in this niche are rare,” Silidker says. “The Revel Facebook Group is a collection of more than 10,000 people who need my expertise and experience. It’s worked out well for me to build RoamRig into a viable business quite quickly.”

In some markets, Facebook is a primary means for folks to keep in touch with the people and the organizations that are important to them, and it follows that it has become an important marketing tool for many companies. As with other social networking media, success on Facebook comes from being a thought leader and developing information that people want to absorb.