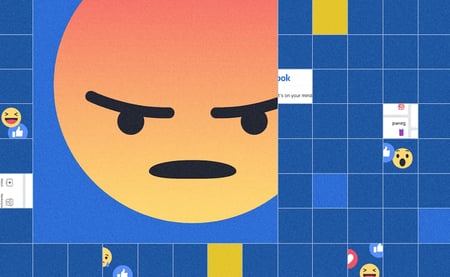 With the detailed revelations emerging about how the Facebook AI algorithm works, we all need to decide how much we want to rely on Facebook in our marketing.

The sad truth is the Facebook Newsfeed rewards anger, conspiracy, and lies. Rather than focus our marketing on Facebook, organizations of all kinds should be publishing content on our own properties.

According to Facebook internal documents as reported in the Washington Post story Five points for anger, one for a ‘like’: How Facebook’s formula fostered rage and misinformation, “starting in 2017, Facebook’s ranking algorithm treated emoji reactions as five times more valuable than “likes,”. The theory was simple: Posts that prompted lots of reaction emoji tended to keep users more engaged, and keeping users engaged was the key to Facebook’s business.”

However, this approach - dialing up the content that generates negative reactions - spreads anger into everyone’s newsfeeds. When angry posts are shared with others in our network more often than other kinds of posts, chaos ensues.

That’s why the Facebook AI algorithm leads tens of millions of its nearly 3 billion active global users into an abyss of misinformation, a quagmire of lies, and a quicksand of conspiracy theories.

Regular readers may recall that I have written a lot about Facebook in the last year or so. For example, in a blog post titled An Ugly Truth: Inside Facebook's Battle for Domination, I discuss a book that digs deep into the insider details behind the algorithm and other aspects of Facebook.

If you are relying on Facebook to market your products and services, either by advertising on the platform or distributing original content through it, you should re-think your strategies.

Facebook advertisers need to consider the moral implications of paying money to an organization focused on generating as much revenue as possible through anger and hate.

In a world where social media platforms cannot be relied on, its urgent for marketers to focus on our own content assets.

When you control your own content, it's distributed how you want, not sent according to the whims of huge company intent on profit above everything else.

Illustration adapted from one used in the Washington Post article cited above.