Last week, the annual HubSpot INBOUND marketing, sales, content management, and customer service conference was finally back to an in-person format! I was struck while attending the terrific conference in Boston how the most memorable aspects were when the presenters showed their point rather than telling us a fact or idea.

The concept of show, don’t tell is a writers’ reminder.

It’s always best to have a character doing something to portray emotion rather than using narrative to simply say how the character is feeling. The most memorable moments for me as I attended INBOUND22 was when presenters showed us an idea or concept rather than just talking about it.

INBOUND was a hybrid event this year, as there was also virtual programming. I didn’t see any of the virtual talks, however it is also possible to show, don’t tell virtually. 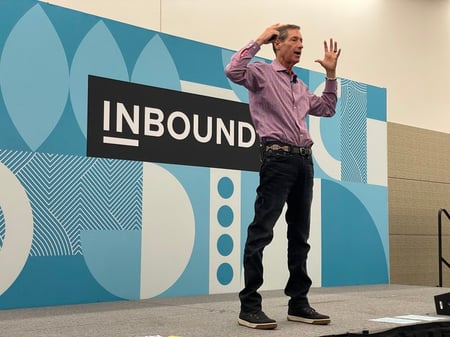 During my INBOUND22 talk “How to Write and Publish a Book that Transforms Business and Supercharges Your Personal Brand”, I used the concept of show, don’t tell right out of the gate.

I started my talk by running down the middle aisle when the walk-on music started playing, then I leapt onto the stage and thew my arms into the air in greeting to the audience.

I could have just moseyed on from side stage and said “I am excited to be here”. Instead I chose to show I was excited before I even opened my mouth.

Here are a few other examples of the concept of show don’t tell in action at the in-person INBOUND22. Now that a week has passed since the event, these are the among the most memorable aspects for me. This is what I remember most clearly.

Heck, I don’t remember a single fact or statistic delivered during the event. But I remember these moments. 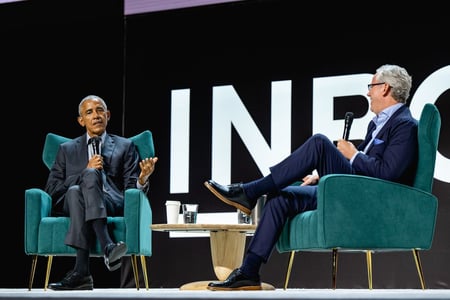 Brian is a dear friend and co-author of our book Marketing Lessons from the Grateful Dead. I was thrilled to hear him ask President Obama about his Grateful Dead fandom.

However, it was President Obama’s story about Queen Elizabeth that was a perfect example of the power of story.

The Queen died the day before the INBOUND22 interview, so Brian wisely asked about her at the top of the interview.

Here is the story President Obama told at INBOUND22 of a visit his mother-in-law and daughters made to England as captured by Jason Aten as reported by Inc.:

“The girls and my mother-in-law came through London probably my second year in office, and there was no expectation that they're going to be seeing her. Actually, Buckingham Palace reached out and she decided to invite them over for tea," President Obama said.

"And so, I've got Malia who at that point is eleven, Sasha who is eight, and my mother-in-law who was a stay-at-home mom and a secretary for a bank--who lived on the south side of Chicago her whole life, sitting there with the Queen of England. And then she insists that the girls take her golden carriage, which I guess she uses for jubilees, on long a drive through the Palace grounds. None of this was ever reported. It was just something that she did quietly.”

Wow. That says a great deal about the Queen, and is much more memorable than telling us that she was kind and generous.

What I loved about the episode is that Kipp and Katie took opposite sides of a debate on the value of Public Relations to an overall marketing program. Rather than just citing facts or giving an opinion which is what most panel discussions do, they debated. And it got heated!

Katie and Kipp used real examples from HubSpot’s marketing and communications experiences to illustrate their points. Even though I was there live, I have already listened to the show again. It’s that good.

In a discussion titled "What's Next: NFT Experiences for Consumer Brands - Who, Why and How", Cameron Bale of NFT.Kred, a platform for the creation, marketing, and distribution of NFTs and several of his colleagues discussed how to use the technology for marketing.

Yes, he and the other panelists discussed why this new technology is poised to disrupt consumer engagement. So far, it’s like most of the other panel discussions.

As a live music fan, I was interested in the NFT.Kred partnership with Live Nation / Ticketmaster to create NFT souvenir ticket stubs. The idea of a verified ticket sitting on the blockchain is a fascinating example of how NFTs can be a part of my own world.

However, near the end of the discussion, I really perked up! Bale showed a QR code on the screen which led to a series of free NFTs created for INBOUND22 participants. The NFTs created ownership of NFT.kred branded merch (hat, backpack, etc.) that could be claimed at their booth. There was also an NFT good for a complimentary evaluation of how to implement NFTs at your company. A nice “show, don’t tell” for sure! 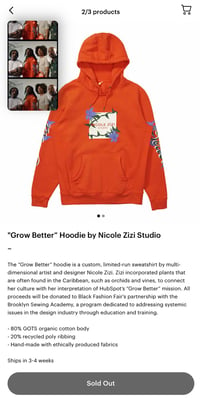 In the "Keeping Focus in the Speed of Culture" discussion, Jason Brown, Consulting CMO at NTWRK, a live video shopping app, discussed how the platform supports up-and-coming designers and artists to share their work.

I loved that at the end of the discussion, a limited edition drop of HubSpot branded gear was made available. I quickly logged into the NTWRK livestream shopping platform, registered, and waited for the moment when the HubSpot orange “Grow Better” hoodie by Nicole Zizi Studio that I coveted was released. I snagged one in the first few seconds, and they quickly sold out.

What a great way to show the power of the live shopping on the NTWRK platform! Brown showed us how the NTWRK platform works by offering cool, limited edition HubSpot branded gear that could only be purchased on the platform.

In presentations, when we write, and in our marketing, we should always be looking for ways to show, don’t tell!

Next year, INBOUND23 will again be a hybrid event with the in-person programming in Boston. The dates are September 5-8, 2023 and advance tickets are available now.

Photo of Brian Halligan and President Obama on stage at INBOUND22 by Benjamin Esakof / Courtesy HubSpot / via Inc.

Photo of me by Orientación Cliente via Twitter @Marketineando