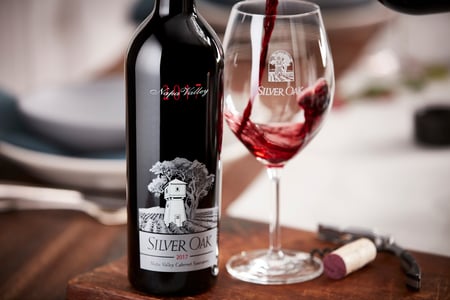 In 1972, Silver Oak Cellars was founded in the emerging Napa Valley wine district of California to craft age-worthy 100 percent cabernet sauvignon at a time when people thought France made the best wines. Since then, the company’s focus on its fans is as important as the quality of its wine in building lasting success.

The niche that Silver Oak launched was unique at the time. They didn’t copy the French blends, rather, they created an American original by aging cabernet sauvignon for about 25 months using American Oak barrels to make an American full-bodied wine.

So important are the barrels to Silver Oak that the company became the first North American winery to own an American oak barrel cooperage to ensure a steady supply for wine-making.

“An unheard-of price, $6 a bottle was more than many of the valley’s wines that were around $3/bottle or less. On pricing alone, one could make the argument this was one of Napa’s first ‘cult’ wines, developing a loyal following without being exclusionary. ‘Luxury-like accessibility’ was born.” – The Napa Valley Wine Project

Now, fifty years later, the high-end yet obtainable wines are very popular with fans around the world. Silver Oak is the exclusive wine partner of the San Francisco Giants and the Golden State Warriors, and counts the likes of Oprah Winfrey, Matthew McConaughey and Lebron James as superfans.

Here are a few other reasons why Silver Oak has indeed achieved cult status.

Most organizations focus their online marketing and social media on a one-way pitch about their products and services. Not Silver Oak. The company engages with people who are current or potential fans of the wine in many ways.

A few years ago, our daughter snapped a photo of me and @YukariWatanabe as we enjoyed a delicious bottle of 2009 Silver Oak Alexander Valley cabernet sauvignon. When I tweeted the photo evidence, @SilverOak responded, “Looks like a beautiful evening! Thank you for sharing with us.”

The hashtag #LifeIsACabernet is a hallmark of Silver Oak’s social media, but the company is happy that others are also using the hashtag.

I also love that the Silver Oak YouTube channel shares valuable information like How to Open a Wine Bottle Without a Corkscrew, a video with 660,000+ views. (The shoe method is genius!)

Silver Oak “bottle stories” are blog posts celebrating Silver Oak enthusiasts enjoying the wine in interesting ways. It has been a feature of their website for more than a decade.

“Mostly what people post is their experiences with the wine,” David Duncan, Proprietor and CEO of Silver Oak Cellars told me. “I get to hear literally hundreds and hundreds of stories throughout the year about people getting engaged, people celebrating a birth, celebrating somebody’s life, or just having pizza on a Thursday night. We’re very fortunate that our business is to make a product that is used for special occasions, be it from the largest occasions in somebody’s life to something mundane but special, and we encourage people to share their experiences with our wine.”

I first learned about Silver Oak back in 2014 when I met David Duncan at a YPO event I spoke at called “Business Lessons from the Grateful Dead”. Yes, both David and his brother Tim Duncan Proprietor and CRO are Grateful Dead fans like me. The team at Silver Oak naturally adapted some of the methods the Grateful Dead has used over six decades to grow their own passionate fan base.

Silver Oak is an expensive bottle, a bit under USD $100 and up depending on the vintage and where you buy it.

What I’ve noticed about other high-end wines is the branding plays off a snobby appeal. Sometimes wineries play “hard to get” - making wines scarce to increase the perception of value. Silver Oak does the opposite. The wine is ready when you want it.

“We like to think of Silver Oak as wine for special occasions,” Duncan says. “It’s available. You can buy it at your retailer, and you can buy it at the restaurant. It’s an expensive bottle of wine, but it’s not an out-of-reach bottle of wine. We treat culture seriously like the culture of the Grateful Dead. We’ve done a lot of work with the winery to determine who we are, what it means, how it feels. Fortunately, our employees get it and I think it comes through in social media, particularly on Twitter and Facebook.”

Last week, Yukari and I visited the beautiful Silver Oak Napa Valley winery. We got a tour, learned more about how the wine is made, tasted some amazing varieties, and had some wonderful food.

It was a fabulous experience! 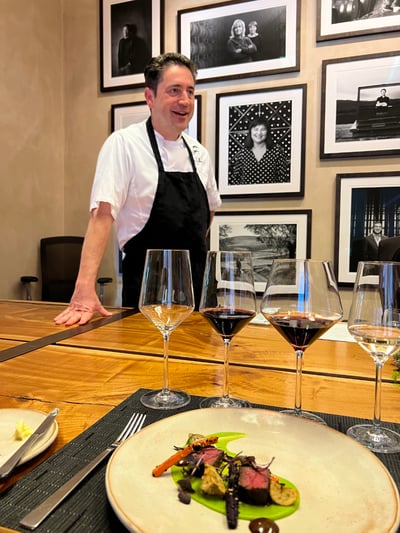 Especially memorable was the fantastic four-course lunch prepared by Executive Chef Dominic Orsini together with a wine paring.

Chef Dominic began at Silver Oak in 2008 and has transformed what it means to be a winery chef. His philosophy centers on creating cuisine designed to enhance the enjoyment of wine.

Many of the ingredients the culinary team uses are sourced from the gardens on the Silver Oak property, creating a sense of place that is so central to the crafting of fine wine.

The Chilled Snap Pea Soup we enjoyed as a starter was especially amazing!

So how good was the meal?

Our Silver Oak lunch was way better than every other meal we enjoyed while we were in Napa. And that includes several dinners at well-known Michelin starred restaurants near Silver Oak from some of the most famous chefs in the world. Wow! Thank you, Chef Dominic. You are as superstar!

Engaging with people on social media, treating customers right, and offering a great product all add up to building fans.

I included Silver Oak’s social media prowess in my book The New Rules of Marketing and PR, now out in a new 8th edition.