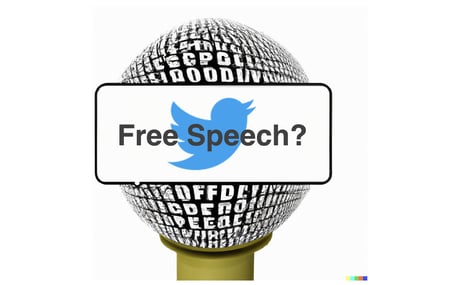 Now that Elon Musk owns Twitter, there is a great deal of discussion about “free speech” on both social media and mainstream media. The First Amendment of the U.S. Constitution states, in relevant part, that: “Congress shall make no law...abridging freedom of speech.”

Here is my take on the debate: The right to free speech does not mean a right of AI algorithm amplification.

In the past few weeks, Twitter has reinstated many formerly suspended Twitter accounts including that of Donald Trump (who so far hasn’t tweeted). Many advertisers representing over a billion dollars in revenue, including Chevrolet, Chipotle Mexican Grill, and Merck have reportedly left the platform and some users are deleting their Twitter accounts, with some moving to Mastodon. At the same time, Twitter is reporting a surge in new signups.

I strongly support the idea of free speech. Early in my career, I worked for Knight-Ridder, at the time one of the largest newspaper companies in the world. Free speech and freedom of the press is something I’ve been focused on my entire career.

While I am adamant that our freedoms be maintained, I also realize that a newspaper company has no obligation to print everybody’s point of view. Similarly, while I support people saying what they want on social media, I do not agree that every dangerous, fake, or crackpot idea deserves amplification by social media companies.

Sure, anybody can create an account. Fine. But the platforms amplify what’s said to people who never chose to follow that account. That’s where social media is different.

Twitter, Facebook, and other social media platforms take what people say and sort it via their artificial intelligence and machine learning algorithms and then selectively show the content to people based on what they have clicked on in the past. This is not free speech, it’s technological amplification.

Those who are susceptible to what the technology serves up to them end up trapped on social media. I do not believe that America is in a free speech crisis. Politicians and others can say what they want, when they want, in many different places, both online and off. Heck, they can even start their own social network like Donald Trump did with his Truth Social.

Free speech does not mean that anybody can say anything they like.

A few weeks ago, somebody created a fake account for pharmaceutical giant Eli Lilly and Co., and tweeted: “We are excited to announce insulin is free now.” This is not free speech.

What the U.S. courts say about Free Speech

Over the years, there have been many challenges to the idea of free speech in the courts. The Administrative Office of the U.S. Courts on behalf of the Federal Judiciary created a list of what free speech is and is not based on court opinions over nearly a century.

Freedom of speech includes the right:

Freedom of speech does not include the right:

I expect there may be free speech challenges around social media use in the courts soon. The one I will eagerly watch, if it comes up, is a case that challenges the right of a social network to deny somebody AI algorithm amplification, which is, after all, what social networks do.

There is profound danger in the algorithms and therefore there should never be a “right” to amplification.

I expect the challenger in such a case will lose. I sure hope so, for the sake of all of us.