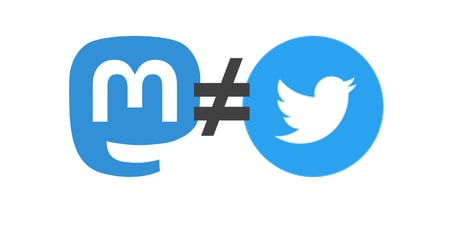 With Elon Musk’s recent purchase of Twitter, some advertisers have reportedly left the platform and a small percentage of people have been deleting their accounts. Many are flocking to Mastodon as an alternative.

Twitter is here to stay. There is no way that Mastodon is a viable alternative.

Let’s look at a few reasons why:

Like the network effect of fax machines in the 1980s, Twitter has already achieved a critical mass of influential users around the world. The cost of leaving the platform, much like deciding you wanted an alternative to fax in the days before wide availability of email, means the vast number of people you want to communicate with are unreachable.

Donald Trump learned this with his Truth Social platform. When he was kicked off Twitter, Trump thought that tens of millions of people would follow him onto another social network that is like Twitter. It just didn’t happen.

In our 24/7 real-time world, Twitter is where people go to say something on the record. Members of the media, politicians, governments, companies, influencers, and celebrities all use Twitter to instantly see and be seen.

The power of Twitter’s real-time influence cannot be overstated.

When pundits compare Twitter with other social networks like Facebook, they typically look at advertising revenue or numbers of users. Those comparisons miss the outsized importance of Twitter as the central hub of how movers and shakers communicate and how the media writes stories by following the Twitter feeds of those who matter.

When a new social network pops up and the defining characteristic is that it is like another social network but better, it’s doomed. Back in 2017 when I joined Mastodon to see what the latest cool kids’ social network was like it was touted as “like Twitter but better”.

Five years ago, Mastodon was reported to be experiencing very fast growth. In many ways it was (and is) better. But it never caught on with the masses.

Like other services that basically copy what’s already established, I do not think that this little flurry of renewed interest is sustainable. Throughout history, social networks that pioneer a new model can thrive (Instagram and TikTok come to mind), but copycats like Google Plus and Ello fail.

Federated social networks are too complicated

The biggest difference between Twitter and Mastodon is that Twitter is centrally controlled while Mastodon is a federated open-source platform.

Instead of a single central service that all people use, there are multiple services, that any number of people can use. That’s sort of good (because nobody “owns” the social network) but mainly bad. It means that setting up and using Mastodon is way more difficult than most non-technical people (like me) will like.

The challenge of setting up and using Mastodon is like buying an NFT using cryptocurrency for the first time. Have you tried that? I have and it’s a pain in the ass! So much so that vastly limits the appeal of NFTs and crypto.

With Mastodon, you must set up an account, create your own server or find a server to host your account, and then find people to communicate with.

While clever tech users will be fine, most people will find the setup process too difficult or time consuming.

By all means play around with Mastodon, but ignore anyone who says that it will replace Twitter.