On Saturday, I attended a Donald Trump rally in Portsmouth, NH as part of my ongoing study and analysis of the marketing aspects of the U.S. Presidential election. It was my second Trump rally (the first was prior to the New Hampshire primary). During this election cycle I also attended rallies with Hillary Clinton, Bernie Sanders, John Kasich, and Marco Rubio. For a marketing geek there’s no better ongoing case study.

At the end of the Trump rally, I was dismayed to see dozens of his supports approach the press section at the back of the venue and angrily confront members of the media covering the event. How did it come to this? For months, Trump used the real-time media as his most effective campaign strategy. Now he’s denouncing the media, calling them “total losers” while claiming the election is rigged and the media is corrupt.

No matter what kind of organization you work with, the mainstream media can provide a boost by talking up what you’re doing. Showcasing your customer, talking up your product launch (Apple is brilliant at this), and quoting your CEO in an industry story are the positive things that marketers and PR pros love from the media. But the media also reports stories that are negative to your brand. 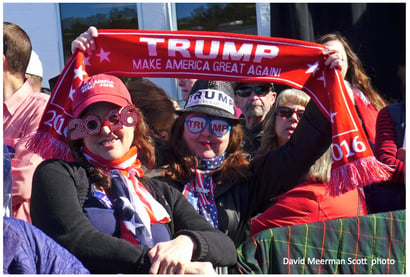 Leading up to the primaries, there’s no question that Donald Trump had a better command of real-time media than any other candidate for President. And that is a big reason that he secured the GOP nomination. Trump trained mainstream media reporters to follow his Twitter feed for quotes on the news of the day.

In contrast to Trump, early front-runner Jeb Bush played by the rules that got his brother elected the 43rd President more than a decade ago. Other Republican candidates were doing the same. But that was a different era. Back then, massive amounts of money spent on television advertising was the best way to influence voters. Now real-time media is the best way.

In August 2015 when most pundits had written Trump off as not having a chance, I conducted a detailed analysis of Trump’s use of Twitter and real-time media. Indeed, between my analysis that August and the early primary elections in the first part of 2016, Trump averaged 18 tweets per day and picked up a remarkable two million new followers in less than five months.

Trump’s tweets were timely and tied to the news of the moment. According to Media Matters for America, Trump generated 22 hours and 46 minutes of free airtime from May 1, 2015 to December 15, 2015 on Fox News alone. That’s more than primary candidates Ted Cruz, Jeb Bush, and Marco Rubio combined. And according to mediaQuant, near the end of the primary season in March 2015, Trump’s campaign had totaled $2.4 billion in earned media value, far surpassing the other Republican candidates. I’ve argued for months that this is what won him the nomination.

When the media is helping you, it’s great.

But in the past few weeks, Trump’s relationship with the reporters and editors who propelled him to victory in the primaries has soured. Now journalists are writing and broadcasting stories that are not what the campaign wants to see, most notably recorded conversations on the Access Hollywood bus.

On the stump in Portsmouth, Trump made news by challenging Hillary Clinton to take a drug test before the next debate. This was reported by hundreds of media outlets over the next 24 hours, benefiting the Trump campaign.

At the same time, Trump had nothing but bad things to say about the press.

At 8:50 into his talk, Trump told his supporters that the media is against them. "The election is being rigged by corrupt media," Trump said. Soon after, the audience broke into a chant "CNN sucks! CNN sucks! CNN sucks!" while Trump flashed a thumbs-up.

Later, 21 minutes in, Trump said, "Don't forget. I wasn't supposed to win. I was a businessman with no experience, but I was always very political. The geniuses back there,” at this Trump is pointing to the press section at the back of the rally site. “Charles Krauthammer, there's a real winner, Charles Krauthammer says, 'Donald Trump has no experience and he has no chance.'”

Trump then calls members of the media "Total losers."

At this point some Trump supporters have turned around to face the press section and are booing. A few are pointing and gesturing.

At the conclusion of the rally, many Trump supporters, fired up by Trump’s portrayal of the media, approached the press section to shout at the reporters. 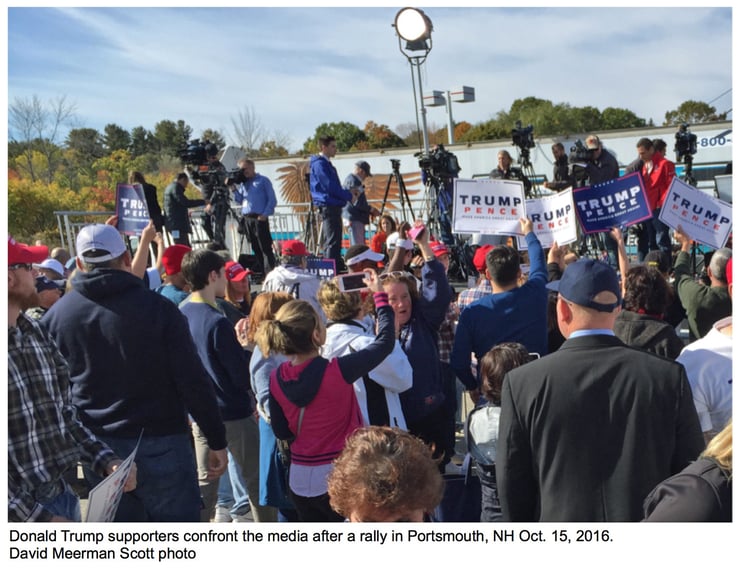 Yes, the media can help your business. But if reporters are digging for information on a story that’s bad for your reputation – VW emissions testing, Wells Fargo cross-selling accounts, and the Samsung Galaxy Note 7 fire stories come to mind – it doesn’t mean that you can dismiss their work.

This election season has been an absolutely fascinating marketing case study. We have three weeks to go until Election Day. There is much more to come. Hang on tight because it will be quite a ride.

If you are attending HubSpot’s #Inbound16 event, please consider swinging by my presentation Trump, Bush, Clinton, & Sanders: How Inbound Marketing and Inbound Sales Decided the 2016 U.S. Presidential Election on Wednesday, Nov 9, from 1:00 to 1:45. My talk is the day after Election Day! There will be a lot to discuss in just 45 minutes.