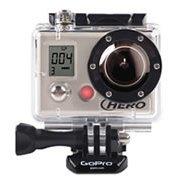 Back in 2007, I enthusiastically gushed about the GoPro digital camera, which I had purchased to take photos and videos while surfing. I was a very early adopter (the product had only been out a month or so). Here is a link to that post: Marketing 1-2-3: 1) Find a problem to solve 2) Build a product that solves it 3) Encourage your customers to tell your story.

In my post, I said: "[GoPro] should focus on user-contributed photos [and videos], but the product was only introduced a few weeks ago, so I’m sure that with a product like this, more will come very soon."

Let your customers tell your story in social media.

Wow, have they ever tapped the crowd! The GoPro Facebook page has nearly 1.7 million "likes" and many people post photos and videos to the page. For a taste of the sorts of things people post, check out this awesome video (direct link on YouTube here.)

GoPro excels because they are focused on the problems people are willing to spend money to solve (in my case, someone who wants to shoot photos and videos while surfing).

Not long after my original post, I interviewed Nicholas Woodman, founder & CEO of GoPro for a story in the book Tuned In I co-authored.

"The larger camera companies are building product on such a massive scale that it is not interesting to sell to a small niche market," Woodman told me then. "GoPro’s cameras are more specialized and compliment your regular camera. You still take your Canon to a wedding, but out in the surf or on the mountain you need something else."

What's so fascinating about this example is how different buyer personas articulate problems. Photographers said, "How can I protect my camera in the water?" But surfers asked, "How can I take photos while surfing?"

Buyer persona research yields surprising information and when you are tuned in to a problem people are willing to spend money to solve (in this example, the desire to shoot photos while performing an already difficult task). When you build a product that solves it, you are on the road to success.

Since my original post, the company has expanded way beyond surfing.

"Because surfing is so demanding from a usability and environmental standpoint, our product also worked very well for other adventure sports," he said. For other sports, the core camera is the same, but the associated accessories and mount is different. For example, GoPro adapts to mount onto bicycle handlebars and onto helmets and other body parts for sports like rock climbing and kayaking.

When adapting the camera to a new sport, Woodman told me that he has several prototypes built and then goes into the field to ask people to use the product, beat it up, and give feedback. "One of the great things about the markets we sell to is that they are made of passionate people," he said. "The things that we think of could never be thought of in a boardroom. Ideas come when we are out playing. We go straight to the source. We don't ask our grandmother what she thinks about our motorsport mounts apparatus; we ask race car drivers."

So how is GoPro doing now, five years after I first spoke about them?

In an article on the front page of today's Boston Globe Helmet cameras grab the slope action is this: "Sales tripled from 2010 to 2011, to 1.3 million units, according to Chris Chute, a research manager with the Framingham office of International Data Corp., a global market research firm. The devices, known as hands-free or wearable video cameras, generally retail for $200 to $400, depending on the model and accessories."

Holy cow. That's hundreds of millions of dollars. From zero five years ago. All based on buyer personas!

Are you focused on your buyers?

By breaking down buyers into distinct groups (such as surfers, race car drivers, sky divers, and others in the case of GoPro) and understanding what problems each one has and how to solve them, you make it far easier to create breakthrough products like the GoPro camera and its associated mounts.

Buyer Personas also make it much easier to market your products. Rather than web content that is simply an egotistical spewing of gobbledygook-laden corporate drivel, you actually create content that people want to consume and are eager to share.

However, this approach is utterly different from what most organizations do: either not segmenting the market at all (creating nonspecific marketing for everyone) or segmenting based on their own product-centric view of the world.

It is so exciting to see GoPro's extreme success.