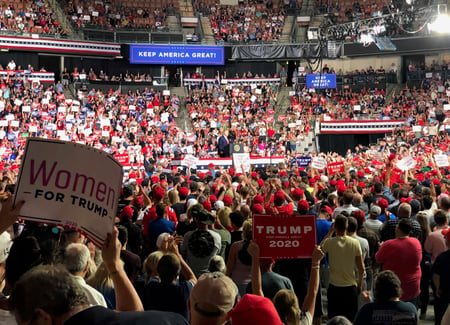 Last night I was one of 11,500 people packed into an arena in Manchester, New Hampshire witnessing the Donald Trump show. And what a show it was! Long-time readers know I don’t comment on politics, instead I analyze marketing strategy because the U.S. Presidential election is a two-year real-time marketing case study. We can all learn marketing strategies to apply to our own businesses from how the various campaigns use marketing to try to get elected.

Besides Trump’s event last night, I have been to 16 (yes sixteen) Democratic Presidential candidate events in New Hampshire this year. Just like I observed in the 2016 cycle, Trump is, at least so far, the best marketer in 2020.

It’s important for me to state clearly a few things before I get to the details of my observations.

By analyzing and commenting on a Presidential candidate’s marketing, I am not saying I do or do not support that candidate. This is a marketing analysis. The same is true of when I write about the marketing aspects of a product or company. For example, it has been more than 40 years since I last ate KFC because I don’t eat the kind of food served at KFC. Yet I can still blog positively about KFC marketing.

I also want to clearly emphasize that when I talk about one aspect of a candidate's marketing, such as my analysis here of the Trump rally I attended, I am not commenting about all of that candidates marketing. In the case of Trump, for example, even though you will read here my positive marketing thoughts on his rally last night, I do not agree with other aspects of his marketing such as his polarizing use of Twitter to attack enemies or his lack or transparency and failures to tell the truth. Those are certainly not good marketing.

With that out of the way...

First, the sheer size of the Trump rally was remarkable. The event was scheduled to begin at 7:00 and the doors scheduled to open at 4:00. I arrived around 2:00, a full five hours before start and by the time I arrived, the line was already a quarter mile long. I learned later that the U.S. Secret Service had to deny entry to anybody who arrived later than the 4:00 doors open time.

More than 5,000 of those who couldn’t get in stayed and watched from a Jumbotron outside the arena.

From the stage, Trump said some people waited two days to get up front. Clearly Trump has many passionate fans, but that makes sense for a sitting President. The long lines and full arena with overflow outside were also true of President Obama when I went to one of his events in New Hampshire. Still, Trump’s fans are super passionate.

The biggest contrast I see between Trump and the Democratic challengers is that Trump’s messages are very clear and easy to understand while the other candidates messages are mostly convoluted and difficult to remember.

For example, Trump’s slogan “Make America Great Again” (MAGA) clearly captures his promise to his audience. The slogan was known the world over when he ran in 2016 (I asked people by a show of hands in about a dozen countries and it was always more than 90 percent recall even in places like Panama, Finland, and Poland).

“Make America Great Again” is even more widely known now. I saw thousands of people in red MAGA hats last night and Trump amplified that by using the phrase himself in his speech, always to wild applause.

I challenge you to recall any other presidential candidate slogan from either the current 2020 cycle or the 2016 cycle. Biden? Warren? Sanders? Harris?

Quick question: What was Hillary Clinton’s slogan from 2016? Most people couldn’t recall it during the election year itself (an average of ten percent when I asked for a show of hands in my USA talks back in 2016) let alone now, four years later.

“You have no choice but to vote for me, because [if a Democrat is elected in 2020] your 401(k)’s down the tubes, everything’s going be down the tubes,” Trump said. “So whether you love me or hate me, you gotta vote for me.”

At the 16 Democratic challenger events I’ve attended so far, most candidates focus on detailed policy ideas instead of simple to understand messages. The same thing has played out at the Democratic debates so far this year.

I understand that many Democratic challengers try to be super careful about telling the truth in order to contrast their ideas from those of Donald Trump. Contrast is good in marketing. But contrast doesn't work when it is too complex. I’d suggest that the policy details should be in platform documents on the candidate website and the speech is for a few simple to understand big picture ideas.

The only candidates I recall doing this well at events I attended were Jay Inslee’s strong focus on climate change and Elizabeth Warren’s strong focus on corporate greed. Those were memorable and in the case of Warren, has transformed her to a top tier candidate.

Trump is a master at getting people to participate in his rallies. He makes people feel as if they are part of the action rather than just a spectator. At a Trump event the audience is as important as the candidate.

For example, fans at Trump events love spontaneous chants like “Four More Years!” “Fake News!” “CNN Sucks!” and “USA! USA! USA!” When these chants start, Trump lets them go, feigning disgust by stepping away from the podium with throwaway hand gestures. But the audience is in on the secret – it’s all part of the show. And people love it.

In the middle of his speech, Trump brilliantly asked the crowd about their preference for what the campaign’s 2020 slogan should be. Never mind that it was already chosen. The crowd could “vote” by cheering for either the “Make America Great Again” slogan from 2016 which he called “the greatest slogan in the history of politics” (I would agree) or a new slogan “Keep America Great”. 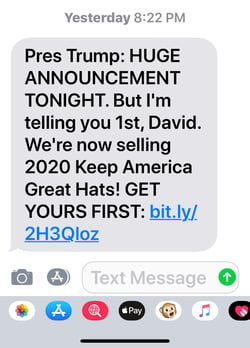 By asking the crowd for their preference of slogan, Trump made 11,500 people feel as if they had a say in how the campaign was to be run. No other candidate has done something like this. It was brilliant marketing.

Soon after the “Keep America Great” crowd selection, while the rally was still underway, I received a real-time text message from the campaign with an offer to buy a hat with the “new” slogan. Wow. The integration of marketing inside the rally and marketing via text was spot on, unlike most of the Democratic challengers (except Warren).

The Trump campaign uses music effectively. There was a country music band entertaining people as they waited in the long line outside. Once inside the venue, classic rock played, quietly at first, building gradually in volume over the four-hour wait to rock concert level.

I have no doubt the songs, all recorded between 30 and 55 years ago, were carefully chosen to appeal to Trump rally goers. We heard The Who, the Rolling Stones, Elton John, Tom Petty, and other similar acts. The song selection played perfectly to the demographic of the people in the room.

An aside: It’s interesting to me that many of the bands played at the rally last night were British acts, not American. Did others in the audience notice? Did they care? Is “America first” a selective approach when convenient?

Thanks for reading this far. Did you remember Hillary Clinton’s 2016 slogan? No? I didn’t think so. It was “Stronger Together”.