Video of my INBOUND 2016 talk: How Inbound Marketing and Sales Decided the 2016 US Election

Regular readers of my blog know that I have been writing and speaking about the marketing aspects of the US Presidential election for 18 months now. My analysis culminated less than 12 hours after Trump was declared the winner when I delivered a talk on November 9 at the HubSpot INBOUND conference titled Trump, Bush, Clinton, & Sanders: How Inbound Marketing and Inbound Sales Decided the 2016 U.S. Presidential Election. Video of that talk is now available.

The marketing and sales aspects of the crazy 2016 U.S. Presidential election

Early front runner Jeb Bush and the Super Pacs that support him spent a hundred million dollars on television advertising but generated just a tiny handful of delegates forcing him to drop out of the Republican primary race. Donald Trump spent almost nothing on ads, instead building a strategy on Inbound Marketing and Inbound Sales with a specific focus on real-time communications and newsjacking. The smartypants pundit class laughed when Trump entered the race but he out marketed the field to win the Republican Primary contest.

On the Democratic side, Bernie Sanders supporters were vocal on social media, creating an insurgent campaign from scratch that grew from early single digit polling numbers to gain the support of millions of Democratic primary voters. However Sanders suffered from the dark side of social media as “Bernie Bros” and others shouted down anyone who didn’t agree with them.

Sanders’ initial success forced the Hillary Clinton campaign to step up their social media game or lose to a 70-something socialist.

I’m a massive U.S. Presidential Politics nerd and this talk takes you from New Hampshire to the White House to explain the nutty 2016 election cycle. I offer specific learning from what the candidates did well and how they messed up that everyone can apply to their own Inbound Marketing and Inbound Sales strategies. 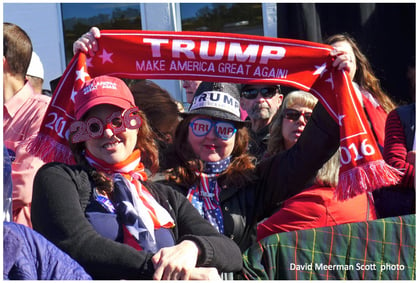 Donald Trump won because he understood his buyer personas better than the Clinton campaign. He created a strong, memorable message from the moment he announced his candidacy a year and a half ago. “Make America Great Again” (#MAGA) captured his promise to buyer personas. People all over the country knew the slogan. Trump used inbound marketing to make himself the 45th President of the United States.