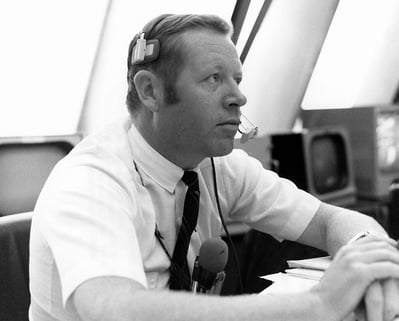 He was a marketing and public relations pioneer as important as Edward Bernays, David Ogilvy, Steve Jobs, and Walt Disney.

Best known as the “voice of Apollo” for his countdown to the launch of the first lunar landing mission, King’s voice is one of the most recognizable in the world. The original broadcast of the Apollo 11 launch and the subsequent replays have reached the ears of more than a billion people, some of them many times.

While Jack’s countdown fame has featured in all of the obituaries I’ve seen, Jack had a much greater impact on the world of marketing and PR as a true innovator of what we now call content marketing and brand journalism. His push for live television in the spacecraft and the availability of real-time spacecraft-to-Houston Mission Control voice commentary allowed humanity to share in the magic of landing on the moon. Jack’s efforts were as important to the Apollo lunar landings as any astronauts'.

Jack served from the earliest days of human space travel during the Mercury program though to Projects Gemini and Apollo. Prior to joining NASA, Jack worked for the Associated Press. He opened the AP's Cape Canaveral bureau in 1958, when he was 27 years old and served as Chief of Public Information at NASA’s Kennedy Space Center from 1960 to 1971.

I interviewed Jack several times while conducting research for my book with Rich Jurek Marketing the Moon and I most recently spoke with Jack several months ago near his home in Cocoa Beach, Florida.

“The core contingent of NASA Public Affairs people—just about all of us—were ex-newsmen,” Jack told me. “We were good writers, and we knew the news business. That made a major difference in the whole operation.”

The NASA Public Affairs Office’s ranks of journalists understood what constituted a good story and what details appealed to the press. NASA created materials that addressed reporters’ needs in press releases, bylined articles, background materials, and in sponsored media symposiums, television newsreels, and fully produced radio broadcasts complete with interviews and sound effects. This content output helped to feed a world hungry for information about America’s space efforts, and the world’s press outlets clamoring for content to serve up to their audiences were more than receptive. Content was not only king during Apollo, it was also one of the earliest successful brand journalism campaigns in history.

Interestingly, the countdown itself is content marketing. In a phone call with Rich and I, Jack described the backstory of the countdown and how it became so iconic. Jack handled it as a journalist would, understanding the technical aspects of what was happening to the spacecraft so he could provide real details rather than just a memorized script.

“The launch is really just the tip of the iceberg,” Jack says. “You have a whole series of preparatory test that go on, including the flight readiness test, the countdown demonstration test, and we assimilate all these. I had the opportunity to sit in on all of those and that gave me a lot of wealth of experience. What ultimately worked was I never used a script. I used cue cards so at a certain points I’d have a little more information other then what was showing on the countdown manual to explain it a little better, just to remind me as I counted down. But I did the whole thing by ear. I've always gotten a kick out of the last note I had on the cue card during an Apollo launch was the so called ‘chicken switch.’ If the astronauts had to abort the launch shortly after lift off, it described how the system worked so they could escape from the exploding rocket. Thank God I never had to use it.”

The Whole World Is Watching: Live TV on Apollo 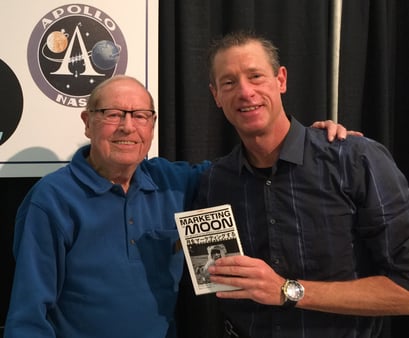 Ask anybody over the age of around 50 about the moon, and, like me, they’ll talk about the amazing live television broadcasts from the lunar surface.

I was eight years old when Neil Armstrong and Buzz Aldrin landed their lunar module Eagle on the moon on July 21, 1969. I remember when subsequent missions occurred during the school day, televisions were wheeled into my elementary school classroom so we could watch liftoffs, lunar EVAs “moonwalks” and splashdowns.

Live television from the moon, conceived and developed by NASA in partnership with contractors such as Westinghouse and RCA, was the ultimate in content marketing. What better way to showcase what your organization is up to then providing live, real-time video footage that any television station could broadcast at no charge.

As important as all the live television transmissions were to the American people who footed the bill for Apollo, they almost didn’t happen.  And without Jack’s persistence, live television probably wouldn’t have been along for the ride.

Live television transmissions were not in the original plans for Apollo. Many administrators at NASA said television was unnecessary. Most of the astronauts and their bosses insisted that operating television cameras would detract from the important work of the mission.

NASA mission planners argued against adding seemingly superfluous tasks to the flight plan. Engineers at NASA and at the assigned contractors resisted the inclusion of television on Apollo, since a camera and the associated signal delivery hardware would only add to the weight to the spacecraft, particularly the lunar module. (Indeed, weight became so critical an issue during the lunar module manufacture that NASA paid Grumman, the prime contractor, $50,000 for each pound it removed from total launch weight. And that was $50k of 1960s dollars.)

It reminds me a great deal about how marketers today must push reluctant corporate executives to allow the use of social networks like Twitter and Facebook at work. The entrenched old guard hates change and fears new technology while other see the benefit in new ways to communicate.

Within NASA Jack and a few others remained convinced of the visual power of live television and pushed against the old guard. Television made it on board the Apollo missions only as a result of the efforts of a small group of NASA visionaries including Jack and years of persistence.

There’s no doubt that live television from the moon is one of the most memorable human legacies of the twentieth century. It is an epic story of visionaries struggling against entrenched notions of access and information distribution. That this content that was conceived and paid for by an organization, NASA, to educate and inform its publics—both the American people who were paying for the program plus the rest of the world’s population who were in awe of America’s technical prowess—presents a fascinating business case study that teaches modern marketers a great deal.

Gene Cernan, Apollo 17 Commander and the last man to walk on the Moon, who wrote the foreword to Marketing the Moon was emphatic about the power of television when he spoke with Rich and I in an interview for the book. “If you want to market the Apollo program, put the astronauts on television and let them have a press conference on the way home,” Gene said. “Without television, Apollo would have been just a mark in a history book. But to those people who were alive and remember it, it’s visionary, as if they were there.”

You’re not the first marketer to struggle with content creation, audience development, and skeptical bosses. We all have a lot to learn from Jack King, a true marketing and PR visionary of America’s space program of fifty years ago.

Bottom image: I'm presenting Jack King with the Japanese edition of Marketing the Moon in November, 2014. Jack was proud that Rich and I wrote about his role in the marketing and PR aspects of the Apollo program.