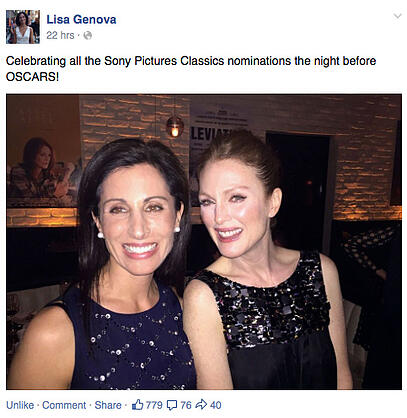 Last night, Julianne Moore won the best actress Oscar for her role as a university professor whose descent into dementia due to early-onset Alzheimer’s Disease was portrayed in the film Still Alice.

The amazing backstory behind the award is that all the big publishing houses had rejected Lisa Genova, the author of the novel Still Alice from which the movie was based.

Lisa didn’t let rejection stop her. She used her Web site, social networking, a blog plus tenacity and perseverance to get the book into the market, leading to stunning success and a walk down the Academy Awards Red Carpet.

I first wrote about Lisa in a 2009 blog post How Lisa Genova used social media to turn a self-published book into a NY Times bestseller. I also included her story in my book World Wide Rave.

I met Lisa back in 2007 at Grub Street Writers in Boston where I delivered a course on book marketing that Lisa attended. We both lamented the traditional conventions of book marketing and strategized on how we can market our books ourselves using the web and social media. Traditional publishers also rejected my first book, Eyeball Wars, and I too had to use the Web to get my work out there.

Rejected by the Gatekeepers

After Lisa wrote the book and was ready to get it into the market, she spent a year trying to get literary agents and editors at publishing houses to speak with her. The editors all treated her as yet another aspiring writer not worth their time, and the few literary agents she managed to reach thought her novel wouldn’t sell.

But Genova—who graduated as valedictorian from Bates College with a degree in Bio-psychology and holds a Ph.D. in Neuroscience from Harvard—knew in her gut that her story of Alice, a fifty-year-old psychology professor whose initial moments of forgetfulness and confusion gradually worsen and steal pieces of her identity and self-image, would resonate with a large number of readers. “Five million people have Alzheimer’s, and each has family and friends who know them and care about them,” Genova says. “So I thought the market for the book could be big.”

Genova had Still Alice all ready to go; all a publisher had to do was sign a deal. “The book was written and edited, and I had quotes for the back,” she says. “I even had an author photo, and my husband designed the cover.”

Bringing Passion for a Topic

Genova developed a Still Alice Web site, which is chock-full of information about her and the book. “I’ll be the first to admit that I’m not very savvy about HTML, but I was able to make it work,” she says.

Drawing from her professional associations and on her accurate attention to detail, Genova felt confident that the book would be interesting to important groups like the National Alzheimer’s Association. “In my conversations with physicians and scientists, having an understanding of the molecular biology of this disease certainly gave me the knowledge and the vocabulary to ask the right kinds of questions and the ability to understand the implications of their answers,” she says. “It gave me access to the right people to talk to. My professional background gave people the credentials they needed to feel comfortable letting me in and revealing what they know.”

She worked with the Dementia Advocacy and Support Network and spoke daily with patients. “People with Alzheimer’s stand on ground that is constantly shifting beneath their feet,” she says. “Familiar symptoms get worse (more frequent or intensified) or new symptoms emerge, and so just when people think they’ve adapted to it all, made all the adjustments and accommodations needed, there’s more work to do. This can be frustrating, exhausting, demoralizing. I see all that.”

Genova reached out to the Alzheimer’s Association because she was convinced that Still Alice, although fictional, was still a truthful and respectful depiction of life with the disease. “And it was unique in that it presented this depiction from the point of view of the person with Alzheimer’s, rather than the caregiver,” she says. “I thought the Alzheimer’s Association might be interested in the book in some way, perhaps endorsing it, providing a link to it from their website, etc.”

Genova contacted their marketing department and gave them the link to the book’s Web site, which was already up. They asked for a copy of the manuscript. “Soon after that, their marketing rep contacted me saying they loved the manuscript,” she says. “They wanted to give it their stamp of approval and asked if I would write a blog for the nationwide Voice Open Move campaign they were launching [at the] end of that month.”

The interest from the Alzheimer’s Association forced Genova to make important decisions about the book, because Still Alice still wasn’t published. “It could take years for it to find a publishing house and become available to readers,” she says. “Realizing that I’d created something that the Alzheimer’s Association thought was valuable—that could help educate and reassure the thousands of people trying to navigate a world with Alzheimer’s—I felt an urgent responsibility to get the book out.”

Genova chose to self-publish Still Alice with iUniverse, a print-on-demand publisher with partnerships at online retailers to sell their books. At the same time, she agreed to write the blog proposed by the Alzheimer’s Association, formally affiliating with the group and personally committing to donate $1 per book to Alzheimer’s care and research through the association.

However, her work had just begun, because once Still Alice was published on July 13, 2007, Genova set out to create what I call a World Wide Rave, the subject of my 2009 book - which is now completely free as a PDF (with no registration required) and on Kindle, iPad, Nook, and Kobo ebook readers.

A World Wide Rave is when people around the world are talking about you, your company, and your products. Whether you’re located in San Francisco, Dubai, or Reykjavík, it’s when global communities eagerly link to your stuff on the Web. It’s when online buzz drives buyers to your virtual doorstep. And it’s when tons of fans visit your Web site and your blog because they genuinely want to be there.

Lisa’s starting point was the National Alzheimer’s Association endorsement. “Of all the books out there on the topic of Alzheimer’s, to my knowledge, mine is the only one to have this stamp from them,” she says. Her first blog post for the organization was titled “How Did I Get Here?” It describes her background as a neuroscientist and her experience with her grandmother who had Alzheimer's Disease.

The natural partnership gave Genova a huge platform. “I received lots of email from people who thanked me for writing the book,” she says. “For someone with Alzheimer’s or a caregiver of a loved one with this, to tell me that I got it right, that it’s uncanny how true it all was, that they saw themselves all over the book, well that’s the highest compliment I can get.”

Genova became a World-Wide-Rave-generating machine. Leveraging the great information on her Web site, she gained the interest of mainstream media and did countless interviews. A great book review appeared in The Boston Globe. She was on Fox News and National Public Radio. And she participated on numerous podcasts. “I got very good at talking about my book,” she says. “I could speak with confidence and efficiency, and it was generating book sales that I could measure, such as the Amazon sales results and the overwhelmingly positive reader reviews.”

The idea for Genova and Still Alice is that a World Wide Rave plus the measurable sales success on Amazon and other online booksellers would generate buzz in the book world. 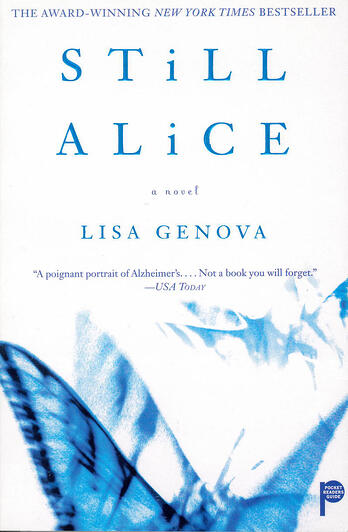 “An agent contacted me and, because of my experience doing interviews, I was prepared to talk about the book,” Lisa says. “I signed with her, and Still Alice sold at auction in June 2008 for just over half a million dollars to Simon & Schuster.” The first print run of the new edition of the book was 250,000 copies and translation rights sold to multiple countries. In addition, Still Alice won the 2008 Bronte Prize.

Upon release, the Simon & Schuster edition of Still Alice made the New York Times bestseller list.

Remember, this is a book that all the professionals said wouldn’t sell(!).

The film version of Still Alice released in 2014 with Julianne Moore in the role of Alice. Alec Baldwin plays her husband John. Kristen Stewart, Kate Bosworth, and Hunter Parrish play her children Lydia, Anna, and Tom. The film had its world premiere at the 2014 Toronto International Film Festival on September 8, 2014. Moore's performance as Alice has been cited by many, and she’s won a Golden Globe for Best Actress – Drama, a Critics' Choice Movie Award, a SAG Award, a BAFTA Award and last night an Academy Award, among other accolades.

Yes, it was a lot of work for Lisa. But what an amazing success story!

One person with a self-published book who had been ignored by the entire book trade shared her enthusiasm, generating a World Wide Rave within a specific group (people who care about Alzheimer’s), and the result is the fulfillment of a dream—the chance to share her passion for the subject with people who care—not to mention a huge book deal from a major publisher, a film version of her book, and a trip to the Oscars.

“Do I think that my Web site, reviews at Amazon, my blog, interviews on podcasts, profiles at MySpace [and sites for book lovers], and reviews of Still Alice at other blogs, links at my Web site to traditional press on the book, all contributed to the bidding publishing houses' ability to see the market potential for Still Alice?” Genova asks. “I absolutely do!”

I’m so excited for Lisa. She shows that with passion and perseverance, you can achieve your goals.

“It feels like I [was] trying to storm the castle of traditional publishing for more than two years,” she says. “I’m bloody and sweaty. But they finally let me in, and now they are welcoming me. I know so many aspiring writers who are sitting in a holding pattern, with a work completed, waiting to find a literary agent. They’re stuck, unable to give themselves permission to write the next book because they’re waiting to find out if their work is ‘good enough’—waiting to find out if they’re a ‘real writer.’  This state of waiting, of not writing and self-doubt, is the worst state any writer can be in. My advice is this: If you don’t find a literary agent falling into your lap quickly enough, if you feel like your work is done and is ready to be shared with the world, self-publish. Give your work to the world. Let it go.

“You absolutely have to have a Web site. Get a profile up on Facebook right away. When you get press, people will immediately want to go to your site. And link to the amazing reviews and news that comes out. Your site is your business card; it is how you show the world what you’re doing. A site facilitates everything you’re trying to do, and you don’t need to spend thousands of dollars. You can do it yourself.”

It doesn’t matter if you’re with a big company, an entrepreneurial startup, or a nonprofit. You could be an author, a pastor, a swim coach, or a rock star. When you’ve got something funny, or fascinating, or amazing, or informational, the world wants to know about it—and many of the people exposed to your ideas will want to do business with you.