Cruise deployed the tried and true method where the film’s star goes on the entertainment television shows and late night talk shows like The Tonight Show Starring Jimmy Fallon.

The Fault in our Stars hits number one

Meanwhile, The Fault in our Stars also released this weekend.

John Green, the author of the New York Times bestseller by the same title rallied his fans to become #TFIOS brand ambassadors. These #FaultFanatics talked up the film big time on social networks and they drove the small budget film to number one in the box office this weekend.

The Fault in our Stars generated an estimated $58 million at the box office (film budget $12 million), thumping the Edge of Tomorrow, which generated about $29 million (with a whopping $178 million budget).

John Green fans who love The Fault in our Stars book drove the box office success.

Throughout the past year or so, Green has communicated to his fans as insiders, providing all sorts of details on the process of creating the film version of the book that they love. 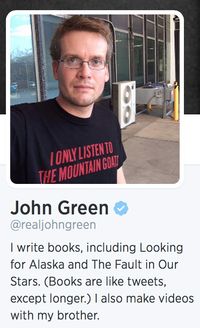 Green sold the film rights and told fans that he has no financial incentive in tickets sales. He’s talking up the movie because he likes it.

Through his Tumblr, @realjohngreen Twitter, video channel, and sites, Green has made fans feel a part of the process. The Fault in our Stars movie site is a fantastic place to explore and share.

Many John Green fans originated from the Vlogbrothers youtube channel that he co-creates with his brother, Hank.

My daughter Allison is a fan of John Green, the Vlogbrothers videos and Green’s books.

“I think a big thing is John acted like us, the fans, rather than a celebrity to promote the fandom involved in the movie,” Allison told me today. “People are encouraged to make art and music and responses to his book. Some of those he reblogged on tumblr and these also translate to the success of the movie. He is very open in communicating with his fans like they are his equals, which fosters community.”

Green talks about treating fans as equals in this video.

His video of the movie premiere is a great example of how Green brings fans along on the ride. In the video you are with him as he arrives, and walks the (not red) carpet, and mugs for photographers.

Lessons for your business

Rallying fans works for any business. When your better-funded competitors are focused on traditional marketing and PR, why not bypass them talk directly to your audience. You can thump the competition too.

+++++++++++++++++++++
UPDATE June 10, 2014 - Saw The Fault in our Stars last night with my daughter Allison and really enjoyed it. I'm glad I had read the book first. Interestingly, every now and then we could hear booms from the next auditorium over which was showing Edge of Tomorrow.