Not so new: Apps and infographics from 45 years ago

When discussing the world of web content and social media, many people like to say how everything is new and different and untested: Smartphone apps! Infographics! Content marketing!

Instead of getting all hot and bothered about the newness of this stuff, I like to look back into history to see what has worked well in the past and how we can learn from that for today. After all, “The Michelin Guide” is a series of travel-related guidebooks published by the French tire company Michelin for more than one hundred years. So clearly, content marketing is not so “new”.

In my new book Marketing the Moon: The Selling of the Apollo Lunar Program which I wrote with Rich Jurek and that features a forward by Gene Cernan, commander of Apollo 17 and the last man to walk on the moon, I explore many marketing and public relations techniques that were used to sell Apollo to congress, American taxpayers, and the citizens of the world. Many of these approaches can be useful to learn from nearly 45 years after the first humans landed on the surface of the moon.

Not so new: Apps and infographics from 45 years ago 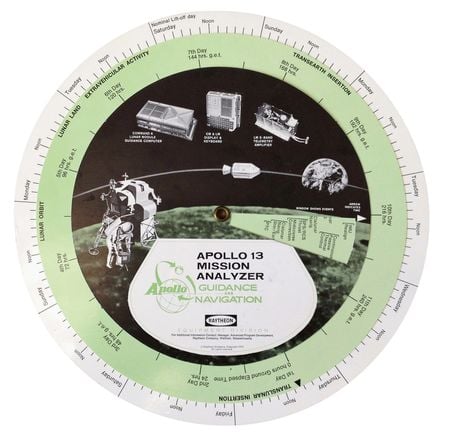 I absolutely love the informational display tools created by some of the contractors who built components for the Apollo spacecraft. I’m so interested in these things that I’ve built a little collection of them and showcased them in the book Marketing the Moon.

The information displays were created as giveaways to reporters and dignitaries. The displays take esoteric mission information and make it easier for non-professionals to understand.

That’s exactly what infographics of today do - make vast amounts of information visual so it is easy to understand.

These devices all have moveable components making them a pre-smartphone version of an app.

The public relations staff that instigated these unusual and valuable tools were not only creating good will for their corporate employers, they were also hoping that these objects might inspire a reporter somewhere to mention their company in print, while citing their connection to the Apollo program. Isn’t that one of the goals of today’s infographics too? Marketers and PR pros want others to talk about them in the media and on social networks.

Heck people are still writing about these cool informational displays. Here’s an article that came out a few days ago in “Slate”: Two Colorful Infographic Wheels Used to Track the Apollo Missions. 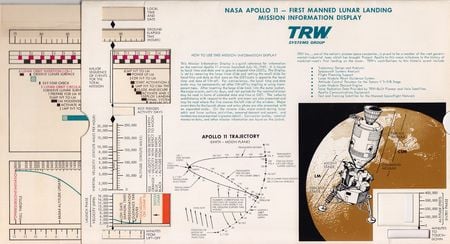 The TRW “Mission Information Display”, among the most elaborate includes estimated time to touchdown for the lunar landing based on altitude as well as a listing of major event data. TRW manufactured the lunar module descent engine and other components for Apollo the Apollo program. They made this TRW Mission Information Display for Apollo 11 as a two-sided slide rule. It is, itself, an impressive feat of information design.

Raytheon produced the circular “Apollo 13 Mission Guidance and Navigation Analyzer,” and similar ones for other Apollo missions, as an aid to understanding the important activities during the missions. Raytheon’s “Mission Analyzer” was used to convert NASA’s Ground Elapsed Time into a more familiar time and day of the week standard. Of course, this analyzer reflected the mission plan had everything proceeded normally. When the oxygen tank exploded in Apollo 13’s service module, the lunar landing was aborted and the mission became one of survival.

Inserting a sense of humor

Here is a fun side note for reading this far. After the book’s publication we were contacted by Monte Wallenstein who is the creator/designer of the Raytheon analyzers who told us: “Notice that on the wheels you see ; they just do not mean moon walk, but are my unique three initials MHW, anyway you turn them. The "-" between the M and W is obviously for connecting the sides of the H!”