Today my newest book is released.

Newsjacking: How to Inject your Ideas into a Breaking News Story and Generate Tons of Media Coverage

The traditional PR model -- sticking closely to a preset script and campaign timeline -- no longer works the way it used to. Public discourse now moves so fast and so dynamically that all it takes is a single afternoon to blast the wheels off someone's laboriously crafted narrative.

Enter newsjacking: the process by which you inject your ideas or angles into breaking news, in real-time, in order to generate media coverage for yourself or your business.

A new kind of business book

I wrote Newsjacking to take advantage of the many features of the ebook format used by Amazon’s new Kindle Fire, Apple's iPad, and the Barnes & Noble Nook. Here's the book on Amazon. and here it is for iPad. For example, with the interactivity to Web content built into these readers, when I talk about a blog post in the book, I link directly to the blog post.

Newsjacking is in full color and contains infographics to illustrate the important points.

While Newsjacking is ebook only, it is from Wiley, my long-time publishers. Newsjacking will not be printed on dead trees. It is a short and punchy book (you can read the entire thing in about an hour) and is priced right. Read more about my ideas (and the many excellent comments from others) on the transformation of books.

You can get your copy of Newsjacking and begin reading right now via Amazon Kindle, Apple iBook (for iPad and iPhone), an Android edition, and Scribd. It is coming very soon for Barnes & Noble Nook and Sony ereader. 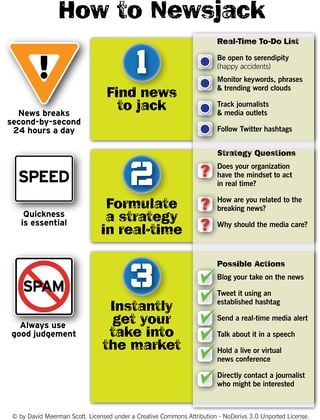 As journalists scramble to cover breaking news, the basic facts -- who/what/when/where -- are often fairly easy to find, either on a corporate website or in competing media outlets' copy.

The challenge for reporters is to get the "why" and the implications of the event.

Why is the company closing its plant? The corporate website may offer some bogus excuse like "because it wants to spend more time with its family." Competitors may quote some expert's speculation on the real reason, but a reporter can't cite that without adding something self-demeaning like "according to an expert quoted in the New York Times."

When a story is breaking, journalists need original content—and fast.

If you are clever enough to react to breaking news very quickly, providing credible second-paragraph content in a blog post, tweet, or media alert that features the keyword of the moment, you may be rewarded with a bonanza of media attention.

Newsjacking creates a level playing field —- literally anyone can newsjack —- but, that new level favors players who are observant, quick to react, and skilled at communicating. It's a powerful tool that can be used to throw an opponent or simply draft off the news momentum to further your own ends.

I stuffed Newsjacking with tons of examples: Rick Perry, Larry Flynt, Oakley, and the London Fire Brigade to name a few.

There's an action plan for how you can newsjack and own the second paragraph of the news story that everyone in your market is watching.

Newsjacking is both a new PR technique and a new kind of business book. 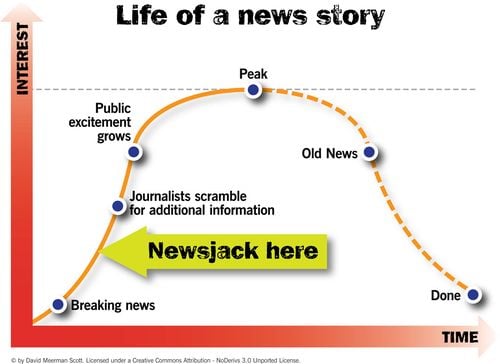