What Are The U.S. Presidential Candidates Passionate Fans Of?

In the research for our new book Fanocracy: How to Turn Fans into Customers and Customers into Fans, my co-author Reiko and I interviewed hundreds of people about their passions and their fandoms. I am super excited to share a project we’ve been working on for months - a Q&A video series about what the U.S. Presidential candidates are passionate fans of. It’s a question they’ve never been asked on the campaign trail, until now!

I’m fortunate to live just 20 miles from the New Hampshire border so I can attend events hosted by the candidates at this first in the nation primary state. So far, we’ve been to 15 different Presidential candidate town halls this election cycle and at each one that had a Q&A, we have posed a simple question to the candidate: “Outside of your work and your family, what are you a fan of, what are you passionate about?

I will be releasing the resulting videos of each candidate answer starting later this week on YouTube and will post background on each video as well as a link here on this blog. Our plan is to post several videos per month leading up to the New Hampshire presidential primary in early 2020.

Regular readers of my work will recognize the videos as a way for me to introduce the ideas of Fanocracy by using Newsjacking techniques. Yes, that’s true. But it’s much more. 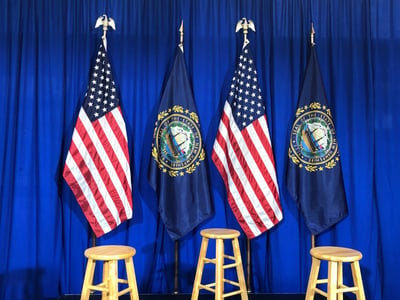 We realized after we had asked the question of about a half dozen candidates that this simple question is actually much more important than we originally thought. In fact, it could be the single most important question we can ask our presidential candidates.

The way candidates including Joe Biden, Pete Buttigieg, Kamala Harris, Bernie Sanders, Elizabeth Warren, and the others answers our question is very telling about who they are as a person, as a candidate, and how they think. It gives clues about what kind of president they would make if elected.

Seth Godin recently wrote a wonderful post titled But what is this question for? His post explores some of real reason behind asking and answering questions, like when you ask a teenager: “How was your day at school.”

Seth says this “is not a question asked to determine how a day at school was. It’s a (lousy) attempt at starting a conversation about feelings. It requires empathy to answer a question that isn’t obviously about the answer.”

At the town hall events, the vast majority of questions are predictable. The same is true at the debates which begin on June 26. Candidates are asked about the issues of the day such as climate change, income inequality, taxes, healthcare, the opioid crisis, and so on. Each candidate already has already worked up the answers to these questions. Heck, you can find the answers on their websites.

But our question is unusual. They aren’t ready for it. After we pose the question, the candidate frequently pauses to think. You can almost feel the tension as they consider how to answer.

At the town halls, some candidates answer our question by naming a sports team. Some share a passion that they have. Some pivot to a talking point. Some offer a short answer. One top tier candidate spoke for eight minutes.

One candidate told me after the town hall was over that I asked the single best question she had been asked in her entire political career!

We are excited to begin sharing what the presidential candidates told us.

The secret language of passionate people

As we were writing Fanocracy, we interviewed hundreds of fans—enthusiasts of things as diverse as skiing and triathlons, knitting and painting, flamenco guitar and acapella singing, classic cars and RVs. It’s abundantly clear to us that those people who build their personal passions into their lives are able to see the world in a different light.They live a truer life by expressing themselves through their fandoms. They pull energy, new ideas, and deep connections from and then back to like-minded people. They learn valuable lessons from their fandoms that they can’t learn anywhere else, whether that be humor, empathy, or creativity.

We think the same is true of our presidential candidates.

This is what our fandoms do — they bring us closer to each other so we may share our joy with others. They are a way to communicate who we are. More than that, they make us happy.

And with that happiness, we find the energy to do extraordinary work.