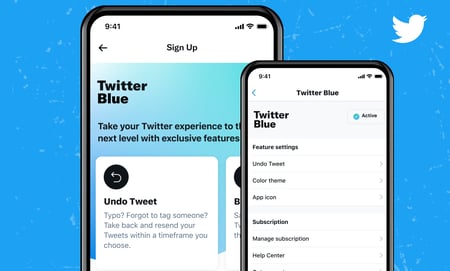 Twitter Blue is the premium Twitter service aimed at power users and priced at $2.99 per month in the USA. I signed up and started playing around and like some of the features.

The company says: “We’ve heard from the people that use Twitter a lot, and we mean a lot, that we don’t always build power features that meet their needs. Well, that’s about to change. We took this feedback to heart, and are developing and iterating upon a solution that will give the people who use Twitter the most what they are looking for: access to exclusive features and perks that will take their experience on Twitter to the next level.”

I suspect that Twitter Blue is being promoted because of pressure from Elon Musk who made an unsolicited bid to buy the company in late April. Musk is a noted “free speech” advocate, but as I wrote about when Musk’s bid was accepted by the Twitter board, the right to free speech does not mean a right of AI algorithm amplification.

There are other features included in a subscription, but here are some that I am either using now or may consider using.

Undo Tweet: Much like the way Gmail gives you a few seconds to “undo” sending an email, Twitter now has a similar feature for Twitter Blue subscribers. Rather than sending a tweet immediately, it is held in a queue for between 5 and 60 seconds (you can set the time in settings). I will use this feature. I’ve often forgotten to tag people, have made spelling mistakes, and wished I added a hashtag to a tweet. This feature is designed to give you a chance to preview a tweet and then edit it before it hits your timeline.

Ad-free Articles: Twitter struck agreements with to deliver an ad-free reading experience from news sites within the Twitter Blue Publishers Network. Twitter uses cookies and when a Twitter Blue user clicks on an article from a publisher in the network, the cookie tells that publisher not to serve ads. Dozens of publishers including Vox, Business Insider, BuzzFeed, The Verge, The Atlantic, Variety, Los Angeles Times, USA Today, Rolling Stone, Washington Post, and Reuters are participating. I like this feature and have followed some of these publications on Twitter so I can see their breaking news and read articles ad free. Note that this feature does not eliminate a paywall if a site has one, but I hope that benefit will be added in the future.

Bookmark Folders: This is a way to organize saved content. Tweets are listed based on folders you create so it is easy to find what you want.

The $2.99 price is right (however I wish they would offer an annual subscription). Of all the social networks, I use Twitter the most, and I am hopeful that more useful features will be added in the future.

Twitter needs to bring in revenue, and I like paying a bit for a service instead of having it chocked with ads.