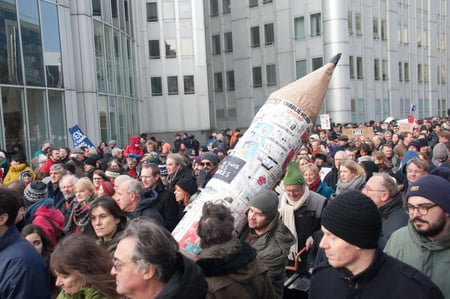 Elon Musk is reportedly in advanced talks to buy Twitter. Unfortunately, his vision of an unfettered town square with few restrictions on what people can say is an impossible utopia. Social networks ceased being free speech platforms a decade ago when they moved from reverse chronological display (newest post at the top) to one showing content to users driven by AI algorithms.

“I think it’s very important for there to be an inclusive arena for free speech,” Musk recently said, echoing statements he has made over the past few weeks. “Twitter has become kind of the de facto town square, so it’s just really important that people have the, both the reality and the perception that they are able to speak freely within the bounds of the law.”

We should be able to say what we want on in all forums, online and off. On this, I agree with Musk.

However, there is a massive flaw in the logic in Musk’s discussions about Twitter as a free speech platform.

If somebody gets banned from a social network because they violated that companies’ terms of service, that is not taking away their right to free speech. They can still say what’s on their mind in many other places.

Twitter, Facebook, and other social media platforms take what people say and sort it via their artificial intelligence and machine learning algorithms and then selectively show the content to people based on what they have clicked on in the past. This is not free speech, it’s technological amplification.

There are massive dangers to both individuals and society associated with this technology. The algorithms are tuned to serve up more and more of what you click on, be that yoga, camping, Manchester United, or K-pop. That sounds great, right? Well sure.

However, if somebody clicks on a sensational social post once because they are curious, the algorithm learns a little bit from that interaction and serves up similar stories in the future. If the user also engages with this subsequent content, then the system serves up still more and more of the same.

This cycle is why social networks like Facebook amplify false information and polarizing content—it’s what the systems have been trained to do! The global social problems posed by Facebook’s algorithm—leading tens of millions of its 2.7 billion global users into an abyss of misinformation, a quagmire of lies, and a quicksand of conspiracy theories—are among the biggest dangers facing humanity today.

Social amplification is a danger to humanity

Social media users get hooked on the drug of seeing more and more of whatever they search for, click on, share or interact with in other ways. If you love birds, you see more birds.

If you are curious about a conspiracy theory your friend shared, click on it, and then find more similar content, you will be served up even more. The technology is optimized to give you what you linger on and for many people, that turns out to be what makes them angry.

At the same time, many people have learned to write the kinds of incendiary posts that tend to get amplified by the algorithms. Politicians in the USA on both the red team and the blue team write explosive things about their perceived enemies to generate attention and raise funds. There is no reward for compromise which is why our politics has become so polarized.

Those who are susceptible to what the technology serves up to them end up trapped on social media.

I do not believe that America is in a free speech crisis. Politicians and others can say what they want, when they want, in many different places, both online and off.

Heck, they can even start their own social network like Donald Trump did with his Truth Social.

There is profound danger in the algorithms and therefore there should never be a “right” to amplification.