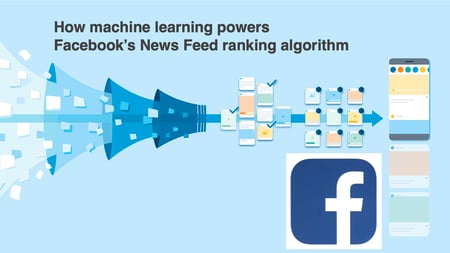 The Facebook engineering department just released an interesting post titled How machine learning powers Facebook’s News Feed ranking algorithm. The post provides new details about what I called one of the most destructive technologies ever invented in my blog post last week. Unfortunately, Facebook does not address the destructive nature of the News Feed Ranking Algorithm in the post.

However, in their desire to tune the algorithm so its 2.7 billion global users have relevant content in their news feeds, Facebook has gone too far because the technology pushes people to see a too much of certain types of polarizing content once the system knows what they tend to interact with.

This means, as I said last week, that tens of millions of people are led into an abyss of misinformation, a quagmire of lies, and a quicksand of conspiracy theories.

My post last week generated a bunch of reaction from readers so I thought this glimpse into the Facebook technology would be fascinating for anyone who wants to dig deeper into what I believe is a massive problem for humanity.

Here are a few of the elements of the algorithm that lead to the problems I identified:

Facebook users get hooked on the drug of seeing more and more of whatever they search for, click on, share or interact with in other ways. If you love birds, you see more birds.

If you are curious about a conspiracy theory your friend shared, click on it, and then find more similar content, Facebook will give you more and more. Those who are susceptible can end up trapped.

The last paragraph of the post reads: “Now that you understand the science, ranking architecture, and engineering behind News Feed more, you can see how our ranking algorithm helps create a valuable experience for people at previously unimaginable scale and speed.”

However, Facebook owes us so much more. Half the adult population on the planet use this technology and it is incredibly harmful.

I am calling on Facebook to explain what they are going to do about the destructive nature of this technology.