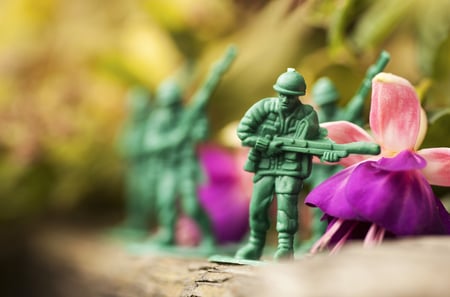 The language of war is used in business and the media so frequently that people don’t even question the appropriateness. Let's work together to eliminate these old tropes from the way we communicate.

SALES: When I was a salesperson at B2B technology companies several decades ago, we typically talked as if we were going to battle with the customer.

We had sales "targets" and when we had a hot one, we sometimes brought out the “big guns” (the VPs) to help us close a deal, to score a “victory”.

A potential customer is not the enemy. Using such language implies hostility and an adversarial relationship with customers which isn't the best way to do business.

MARKETING: In the marketing world, we create “campaigns” and “attack a market”. Sometimes we kick up a “social media fire storm”.

There are many other ways to market than a combative approach. Kinder and gentler works wonders.

POLITICS: “We are at war with COVID-19,” seemed to come from every politician’s mouth in the past year.

Yes, the virus is a public health crisis. However, unlike the way we typically think of war, will not suddenly “win” over the pandemic. The influenza virus, for example, has been with us for centuries. Since the late 1800s, large outbreaks of influenza strains have occurred every few decades.

JOURNALISM: When covering the political world, leaders are “fighting for constituents” and sometimes become “embattled”. They “fire warning shots” from their “bunkers”.

Journalists use these military metaphors all the time in their political stories. When politics is constantly described as war, it means a toxic, polarizing approach from our leaders is acceptable.

Like the use of flexible, scalable, cutting-edge, best-of-breed gobbledygook, military metaphors come from lazy communicators.

Let’s work together to eliminate this nonsense.