In contrast to Trump, Jeb Bush is playing by the rules that got his brother elected the 43rd President more than a decade ago. That was a different era. Back then, massive amounts of money spent on television advertising significantly influenced voters.

The US Presidential election cycle is a massive sales and marketing case study playing out for several years. Since the 2004 cycle, I’ve written about the aspects that fascinate me. I love that we can all see what the candidates do to generate attention and then follow the results via polling.

As always, my comments on the election are not based on politics or the candidate’s views on the issues but rather the sales and marketing strategies and tactics their campaigns are using.

According to data reported by MSNBC, Jeb Bush has spent $38.1 million on advertising to date in the election. That’s way more than any other candidate. Donald Trump has spent just $217,000 on ads. 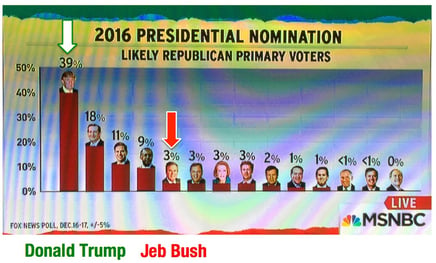 But so far, Bush’s investment has  yielded just 3 percent support from likely Republican primary voters according to a December 16 – 17 Fox News poll reported by MSNBC.

At the same time, Donald Trump is way out in front on real-time connection. He’s constantly commenting on the news of the day from the podium at his campaign rallies and talking about the other candidates on his Twitter feed. That same Fox News poll places Trump at 39 percent support.

Back in August when most pundits had written Trump off as not having a chance, I did a detailed analysis of Trump’s use of Twitter and real-time media and wrote about it in a post Donald Trump Winning the Social Networking Primaries in a Landslide. 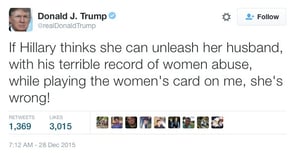 Today, @RealDonaldTrump has 5.46 million followers and has tweeted more than 30,000 times since he joined Twitter in March 2009. He’s been living the real-time media mindset from way before he declared for the presidency. Indeed, since my analysis in August, Trump has averaged 18 tweets per day and has picked up a remarkable 2 million new followers in less than five months.

Trump’s tweets are timely and tied to the news of the moment. He’s living the real-time mindset.

In contrast, @JebBush has less than ten percent of the number of followers as Trump and has tweeted 3,200 times since he joined Twitter in 2010. Prior to declaring his candidacy, Bush wasn’t focused on real-time at all, tweeting less than once a day on average.

Looking at the @JebBush twitter feed, I notice that most tweets are basically advertising, he frequently just pushes out his campaign messages. This is quite different than Trump’s approach of commenting on what’s going down in real-time.

While Jeb Bush is spending buckets of money on TV ads, Trump’s real-time connection is one reason the media wants to talk with him. He’s controversial when he engages with people in real-time. And that generates free media.

According to Media Matters for America, Trump has generated 22 hours and 46 minutes of free airtime from May 1 to December 15 on Fox News alone. That’s more than candidates Ted Cruz, Jeb Bush, and Marco Rubio combined.

I’m absolutely fascinated by the contrast between the strategies of these two candidates.

There is much that we can all learn to apply to our own business by watching this play out.

Of course, it’s not just the US Presidential election. Spending money on television ads doesn’t work so well anymore. Focusing on a real-time connection with your audience and being aware of what’s playing out in the news does.

Important note: This is a marketing blog, not a political blog. I am not commenting on Trump’s nor Bush’s nor any other candidate’s views on the issues. I write about the US Presidential election because it is a massive sales and marketing case study playing out for several years, not because I support any candidate over another.