We’re officially into the 2016 US presidential election season with three major candidates officially declaring so far.

I love this time! There is so much to learn from the campaigns.

What are the candidates saying? And to whom? Do they deliver different information to different groups? Or are they consistent over all audiences?

What strategies do they deploy to get noticed? How do they use social media and the mainstream press to amplify their ideas?

All marketers can learn from US presidential campaigns

It’s like an 18-month ongoing marketing case study with instant feedback of each move!

I first wrote about presidential candidate marketing in 2004 when I analyzed Howard Dean’s pioneering blogging strategy. It’s amazing that was four election cycles ago!

I summed up the 2008 cycle with this post: Ten marketing lessons from the Barack Obama Presidential campaign

And in 2012, I enjoyed talking about newsjacking and the presidential campaign. 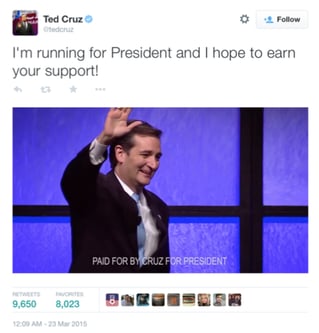 The old playbook was to give a big speech to announce your candidacy, invite journalists to cover it, and hope that some soundbites made it onto the evening news and that you made the front page of the next day’s newspapers.

Here are a few takeaways from how the first three candidates launched:

Ted Cruz was first up.

You do get a little extra buzz as first mover.

Cruz launched on March 23 by live streaming a major speech. I like that his campaign made a point to focus on the live aspects of the speech – anybody could watch via live stream - and not rely on the media to filter the content.

He announced his candidacy on Twitter, his site, and other social networks, but all of the announcements pointed to the live stream of the speech.  This is a nice real-time touch.

Rand Paul came next, officially declaring his candidacy on April 7. 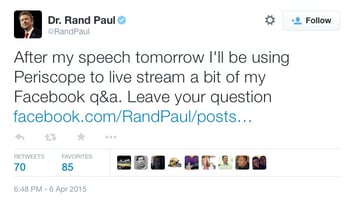 What I found really interesting with Paul was that he did a live Facebook Q&A following his formal announcement. Not only that, part of him doing the Q&A was broadcast via Periscope, the hot new social app that's been out less than a month.

The fact that Paul embraces multiple social media channels has definite benefits. Like Howard Dean and Barack Obama before him, the candidate who best utilizes the many varied tools that people like to consume information can rise above other candidates. 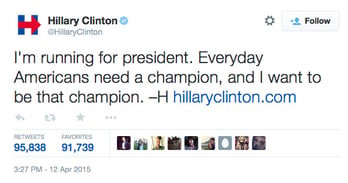 She clearly signaled the announcement was coming so supporters, her detractors, and the media were all ready.

In Clinton’s case, as the candidate with the best name recognition and one who could potentially suffer from opinions formed in her past campaign, the launch was very important.

I found her “big reveal” to be well done. With the tweet announcing her candidacy, she changed her Twitter feed from being her own personal feed with her photo as the avatar image to a logo of her campaign. When she tweets personally, tweets will signed –H.

Simultaneously, her site unveiled a new sharp, modern image, and a launch video called Getting Started was posted.

While this was a low-key launch in many ways, the branding was handled well. It gives her a platform to re-introduce herself to the country.

Learning about marketing from US Presidential candidates

I’ll be posting from time to time during the 2016 cycle on the marketing aspects of the various campaigns.

I encourage you to watch what candidates do to reach their buyers (voters). Think of each candidate as a product and consider what’s good and bad about their marketing strategy.

If you can step away from the politics and just focus on the marketing, I hope you agree that it is a fascinating way to learn!

IMPORTANT NOTE: This is a sales and marketing blog, not a political blog. I focus on the marketing aspects of the presidential candidates, not their politics. I love comments, but would hope they focus more on marketing and less on politics.