Fanocracy Stories: Jack King, the voice of Apollo “liftoff! we have liftoff!” 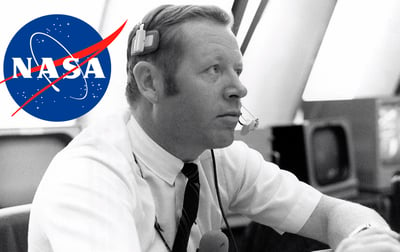 There are three iconic voices related to the Apollo lunar program: 1) President John F. Kennedy's challenge to America "We choose to go to the moon!", 2) Neil Armstrong's first words as he stepped foot lunar surface: "That's one small step for man, one giant leap for mankind" and 3) Jack King's countdown to the launch of the Saturn V rocket that carried humans to the moon. We know a great deal about Kennedy and Armstrong, but what about Jack King? On this, the 50th anniversary of the Apollo 11 launch I share a little about Jack.

Robert Stone and I interviewed Jack for Robert's film Chasing the Moon for which I served as a Consulting Producer. Please watch this short video to learn about the importance of the countdown.

In another interview I did with Jack for my book Marketing the Moon, which I wrote with Rich Jurek, Jack described the backstory of the countdown and how it became so iconic. He handled it as a journalist would, understanding the technical aspects of what was happening to the spacecraft so he could provide real details rather than just a memorized script.

“The launch is really just the tip of the iceberg,” Jack told us. “You have a whole series of preparatory test that go on, including the flight readiness test, the countdown demonstration test, and we assimilate all these. I had the opportunity to sit in on all of those and that gave me a lot of wealth of experience. What ultimately worked was I never used a script. I used cue cards so at a certain points I’d have a little more information other than what was showing on the countdown manual to explain it a little better, just to remind me as I counted down. But I did the whole thing by ear. I've always gotten a kick out of the last note I had on the cue card during an Apollo launch was the so called ‘chicken switch.’ If the astronauts had to abort the launch shortly after liftoff, it described how the system worked so they could escape from the exploding rocket. Thank God I never had to use it.”

Jack served from the earliest days of human space travel during the Mercury program though to Projects Gemini and Apollo. Prior to joining NASA, Jack worked for the Associated Press. He opened the AP's Cape Canaveral bureau in 1958, when he was 27 years old and served as Chief of Public Information at NASA’s Kennedy Space Center from 1960 to 1971.

Besides the countdown, Jack had a much greater impact on the world of marketing and PR as a true innovator of what we now call content marketing and brand journalism.

His push for live television in the spacecraft and the availability of real-time spacecraft-to-Houston Mission Control voice commentary allowed humanity to share in the magic of landing on the moon. Jack’s efforts were as important to the Apollo lunar landings as any of the astronauts.

Sadly, Jack died in 2015 several months after this video was recorded.