Carbon Black Seizes The Moment When Expertise Is In High Demand 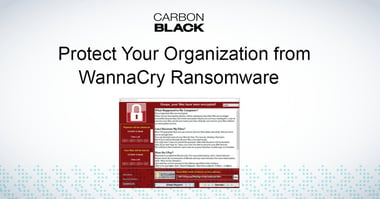 Last month’s massive WannaCry global coordinated ransomware attack affected thousands of business around the globe. At the time, the U.K.’s National Cyber Security Center issued warning about the possibility of another attack: “…it is important to understand that the way these attacks work means that compromises of machines and networks that have already occurred may not yet have been detected, and that existing infections from the malware can spread within networks.”

As the news was breaking, Ryan Murphy who serves as PR, Editorial Content & Social Media Manager at Carbon Black was on a long airplane flight. He knew that this was an ideal opportunity to get Carbon Black into the news because they have deep knowledge of such crimes -- the company was founded by former members of the U.S. government’s elite team of offensive security hackers and the company’s cyber security services protect more than 3,000 companies from attack. But Ryan was stuck on a plane.

“I was traveling from New York to LA and I got a breaking news alert on my phone from the New York Times,” Ryan says. “All my antennae went up and I said, holy cow, we need to do something about this! So the first thought was to leverage our existing content and to go out on social media with some educational messaging so that organizations around the globe, and average consumers who want to learn about ransomware, can have a place to learn about the ins and outs of what comprises a ransomware attack.”

Since WannaCry was determined to be a unique strain of ransomware, Ryan contacted members of the Carbon Black research team to make sure that they were aware of the attack and were protecting customers. Then Ryan worked with the research team to write a blog post Protect Your Organization From WannaCry Ransomware with Carbon Black and get it out on social networks including the @CarbonBlack_Inc twitter feed.

At the same time, an ebook that had already been published on the Carbon Black site titled Ransomware on the Rise was made free with no registration required and the link was shared on social media.

Ryan then began working with the Carbon Black external PR agency Sutherland Gold to actively pitch the media. “We have friendlies that we go to regularly and we’ve established a level of rapport with a number of broadcast and trade publication reporters,” he says. Those efforts resulted in mentions in outlets like TechCrunch and Patrick Morley, CEO of Carbon Black, being interviewed on Bloomberg Television. That clip What We Know About the Global Ransomware Attackwas sent out by Carbon Black on social networks.

All this was going down while Ryan was still stuck on a coast-to-coast flight.

When a newsjacking opportunity pops up, the moment to act is NOW.

“I thank my lucky stars that the Wi-Fi was actually functioning!” Ryan says.

When the WannaCry ransomware attack hit, hashtags #ransomware and #WannaCry quickly became popular on social networks. “We follow the latest trends like WannaCry and figure out what the associated hashtags are,” Ryan says. “But we also leverage basic hashtags to hit our target communities often. One is #infosec, short for information security. A lot of players in our space will navigate that hashtag to keep with the latest trends. Another that is a bit more technical is #DFIR. We try to sporadically post technically relevant content to that hashtag because it tends to be an audience that is well versed in technical content. So when we feel like we have appropriate content we’ll post to that one as well.”

Ryan posts to the Carbon Black corporate Twitter ID but he also coordinates with others in the company who are active with their own feeds. “We have subject matter experts on various topics who tweet and comment on the latest news,” he says. “I’d like to see our program develop more deeply in that respect, but it’s certainly a component to our strategy.”

When your company’s expertise is a trending topic

WannaCry was an attack where ransomware, perhaps for the first time, became ubiquitous. Appearing on the front page of every major publication, leading broadcasts, where cyber security was dropped into the public spotlight.

“It’s the job of any adept communications professional to keep a pulse on the market,” Ryan says. “Cyber security topics have permeated the public consciousness on a deeper level following the 2016 presidential election where there’s been so much conjecture on the possibility of the democracy being affected by cyber attacks,” he says. “This draws awareness to our industry and drives awareness in a better security posture where the average use consumer at least can hold a conversation and is aware that cyber security is an issue that needs to be addressed on some greater level. It’s not just a technical thing, it’s not just an IT issue, it becomes a component to every business, and to some degree consumer strategy when it comes to protecting their valuable data.”

Sooner or later the world will need your expertise. Will you be ready when the moment is right?