How to generate sales with social media in an underground business

Many people I meet have a tough time using content for sales and marketing purposes. This is especially true for those who have spent their entire career generating attention via paid advertising, traditional media relations, and direct sales efforts.

With that context in mind, imagine how difficult it would be to generate sales if you’re running an “underground” business that can’t use traditional sales channels because it is outside mainstream distribution channels?

That’s why I’m so excited to share the story of Liza Puglia and her success. Liza is the owner and chef at NOLA Buenos Aires. She relies almost exclusively on web content and social networking to fill the several tables in her wonderful fledgling restaurant. 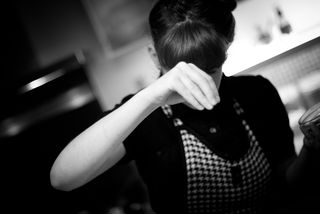 “Puerta cerrada is a great opportunity to tap into the restaurant business as an owner before making that big commitment, whether that’s a financial commitment, a time commitment,” Liza says. “It’s kind of like getting our feet wet without jumping all the way in the pool.”

I totally enjoyed NOLA. There’s the excellent food, of course. But an added benefit as a traveler is I get to visit a Buenos Aires home. But to experience this, I had to do my homework. It’s kind of like members only, like I’m part of an in-the-know community once I figured out the scene.

Liza knows this. “One of the things that really sells us is our exclusivity,” she says. “We’re small capacity. We’re a private residence. It’s somewhat difficult to get a reservation.”

When my wife Yukari Watanabe and I visited NOLA, we chose the communal table and were seated with about a dozen people from all over the world who has also, like us, learned about NOLA via social media. I asked my fellow diners and all of them, every single one, found the restaurant via their social networks, or foodie blogs, or review sites like TripAdvisor.

How to generate sales with social media in an underground business

“Social media is everything for us,” Liza says. “It enables us to spread the word. We know that people are coming to Buenos Aires and they’re literally searching hashtag Buenos Aires on Twitter. So we’ll tweet out that we have availability this Saturday night at 9:30 – hashtag Buenos Aires, hashtag Palermo – so they have a little concentrated search on what it is that they’re looking for. We’re trying to make it as easy as possible for our future clients to make a reservation with us and so they can find us.”

Liza knows that photos attract people who love good food. “Food is so much to me, esthetically,” she says. “If people can see photos of the food that we’re executing they’re more likely to make a reservation with us. Facebook and Twitter and blogging really allow us to share that content.”

There is a strong community of food bloggers in Buenos Aires and many are writing in the English language. So people planning a trip and searching on restaurants will find those blogs. “Local food is one of the city’s biggest tourist attractions,” Liza says. “People blog about it. And then they’ll link to their blog on Twitter and they’ll put us on Twitter. And then we’ll spread their article around so everyone is winning. They’re getting more traffic on their blog and we’re getting more reservations and more exposure. For example, there is the local food blog here in Buenos Aires called pickupthefork.com. She’s probably the No. 1 food website of Buenos Aires and we get a lot of traffic from her site.”

Spreading the word about NOLA to the world 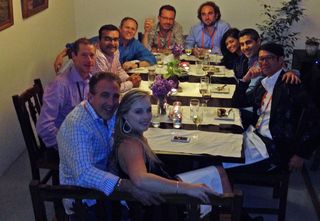 With a business that relies so strongly on social media to drive sales, Liza has techniques to get people talking. “Within 24 hours prior to your reservation, we send out an email to all of our clients with our exact location as well as a reminder that we’ll see you tomorrow,” Liza says. And in the email we say we’re on Instagram. We’re on Foursquare. We’re on Twitter. Feel free to share the word. And then after then after they’ve dined with us, we share the photos of that evening on the Facebook page, tagged with people who were there. People like that and they share those pictures and the word starts spreading.”

Liza actively encourages people to share their experiences. “When we conclude the evening at NOLA, we have a physical guestbook that we have been using since the beginning,” she says. “We present the book to the table as a way to close in the evening and to let people know that we’re a small business with the hopes of getting bigger. And we’re all ears about feedback. Tell us what your favorite course was. Tell us anything. We want to know the good and the bad. That gives people an opportunity to speak their minds about the experience before they have a chance to write about it on review sites. In addition we always send an email the following day, kind of a thank you for dining with us and giving us your time. We hope you enjoyed this experience as much as we did. And if you’d like to spread the word, here’s a direct link.”

A particular form of social media in the restaurant world are review sites like TripAdvisor. Liza knows that reviews of NOLA Buenos Aires are important and she generally gets very positive ones. However, as is true of all restaurants, there are occasionally people who want to express other opinions.

“It’s been a mini rollercoaster with the reviews,” Liza says. “We definitely don’t dispute anything because we don’t want the future clients feeling uncomfortable in writing a critical review if that’s the route they’re taking. We know we can’t please everyone, how boring would that be? However, negative reviews get me upset. It’s my blood that I’m putting into this business. We’re trying our hardest. And if we disappoint someone, then I’m disappointing myself. I try to have my business partner read over those just in case. I do feel like there’s a lot of feedback in the reviews, both good and bad, that can help our business. I still want to be aware of that information. But I don’t need to personally obsess about every review. So once those reviews are submitted, I personally do not look at them anymore. I used to look at every single one for probably the first nine months that we opened. And I just saw how the negative reviews would affect me emotionally. It was really hard.”

Building a business via social media

“I’m extremely reliant on social media,” Liza says. “I don’t think my business would be half as successful as it is without it. It’s great because it’s opened a lot of doors for me. I started my blog when I got to Buenos Aires strictly as a way to stay in touch. Starting the blog forced me to use Twitter and start a Facebook page for the blog. It’s really made a lot of connections for me. I think it’s helped me grow as a person and opened a lot of doors for me business-wise and learning in general. I’m a fan and it’s a good thing for me.”

NOLA Buenos Aires is successful today because people sharing on social media has driven interest and sales, filling the restaurant with people who are eager to experience the terrific puerta cerrada restaurant. As an underground establishment, traditional methods simply cannot work.

No matter what industry you’re in, driving sales via social networking can benefit your organization in the same way it is benefitted Liza and NOLA Buenos Aires.

Photos courtesy NOLA Buenos Aires. Image of the communal table when I ate at NOLA the first time in November, 2013.