The US Securities and Exchange Commission is considering taking action against Netflix and its CEO Reed Hastings because of a Facebook post.

The agency says that the update to Hastings' 200,000+ subscribers where he said "members had enjoyed over 1 billion hours in June" violated the SEC Regulation Fair Disclosure (Reg FD) rule. 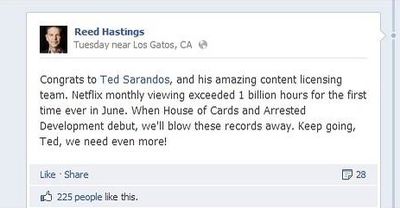 The SEC is charged with making securities trading fair and since Netflix is a publicly traded company, the SEC has oversight. RegFD is the SEC rule that says when a company discloses something of material importance (something that might affect the stock price) that the information needs to be sent to everybody at once.

According to the SEC: "Regulation FD provides that when an issuer discloses material nonpublic information to certain individuals or entities—generally, securities market professionals, such as stock analysts, or holders of the issuer's securities who may well trade on the basis of the information—the issuer must make public disclosure of that information."

The SEC is completely wrong

The issue is not with Netflix. It is with the dinosaurs at the SEC. This is not a stock story. It is a real-time communications story.

Any journalist or securities analyst who has any brains at all would be following what Hastings is saying on his public Facebook posts.

Here's the important point -- by posting to Facebook, Hastings is getting the news out fairly to anyone who wants to see it.

The SEC considers press releases to be the acceptable way to comply with RegFD.

Press releases are fine, but in 2012 saying that only press releases qualify for fair disclosure is like saying the only way to watch movies is in a theater. In fact, when I looked for press releases from Netflix it took me much longer than five seconds to find the relevant pages.

There is no question, based on my extensive previous experiences - 1) working in the real-time news business for a decade; 2) as head of corporate communications for two public companies and 3) as VP marketing for Fair Disclosure Financial Network - that the SEC is wrong.

The SEC needs to develop new rules on what disclosure is in our world of instant communications.

If anyone from the SEC reads this, I'd be happy to come down to Washington and educate you on the new tools of real-time communications. But since this is not a press release, I doubt we'll hear from the lawyers down in D.C.