Confessions of a Media Manipulator 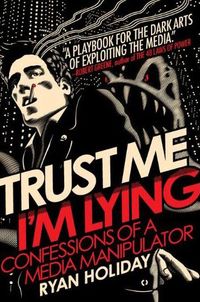 The discussion featured Ryan Holiday, author of Trust Me I'm Lying – Confessions of a Media Manipulator debating Peter Shankman, VP, Small Business Evangelist at Vocus (and founder of HARO). I was also on hand together with Shel Holtz to jump in now and then with comments and questions.

It was a very lively discussion!!

PR Stunts for fun and profit

Here's some backstory: Earlier this month Ryan released his book which received a great deal of coverage mainly because of the clever PR stunt he pulled to get attention. He used HARO (Help a Reporter Out) to respond to queries from journalists about such things as being an insomniac, a vinyl collector, a boating expert, and so forth, (none of which he actually was) and getting quoted by ABC News, CBS, The New York Times, and other news organizations.

Here is a good article on Poynter that provides background on the stunt: Telling the truth about media manipulator Ryan Holiday.

Here is our debate, which is well worth taking 45 minutes to watch.

Direct link to Media Manipulation – fact or fiction on YouTube.

In the debate, Peter was very critical of Ryan's use of HARO because he misused the service. In turn Ryan argued that HARO should vet the reporters and PR people who use HARO. I have to disagree with both Peter and Ryan. I think the way Ryan used the service certainly did prove a valuable lesson. However, having used HARO myself to find sources for stories I’ve written, of course I am going to vet the source. As I said in the debate, HARO shouldn’t get involved in fact checking its users any more than Monster.com should fact check the millions resumes on its platform.

That reporters from A-list media like ABC News and the New York Times didn't do a simple Google search to learn that the "Ryan Holiday" who they were about to quote in a story wrote a book called Trust me I'm Lying is strange!

I've read some of Ryan’s book Trust me I'm Lying (but not all because I wanted to get this post out). I find the book to be a valuable resource for PR people and journalists alike because he has clearly found some details about how today’s media works that you should know.

If you're engaging in Newsjacking (and I hope you are) there are some insights in Ryan's book that will help. But note that unlike Ryan's techniques, Newsjacking does not rely on manipulation. It works because of a knowledge about how today’s real time media operates and that’s what Ryan outlines in his book.

However, I do not agree with Ryan's techniques. Lying about who you are just to prove a point is not appropriate for anyone who wants to do business in the future. Now and forever, whenever anyone Google’s Ryan Holiday, they will learn he is a liar. Would you hire him? Would you work for him?

Sometimes Ryan used a fake name and sometimes his real name to alert the media to stores, which he himself planted. All of this was to expose how online media really works and I think it was largely successful in proving his point and generating interesting anecdotes that we can learn from.

While he was pulling off his media manipulation that he talks about in the book, Ryan was director of marketing at American Apparel (where he still works today). American Apparel is a public company listed on the American Stock Exchange. When I asked Ryan if his employers had knowledge of his stunts, he said yes. I find this fascinating.

An aspect of his manipulation was that he not only seeded (sometimes false) stories to online media outlets, those outlets also carried his company’s advertising. It was a surprising revelation about the porous wall between the business side and the advertising side of online media.

Watch the 45-minute debate and if you want to learn more, read Ryan's book. Sure, there is a lot of manipulation going on here, but there are also lessons to learn for those of us who don’t lie.