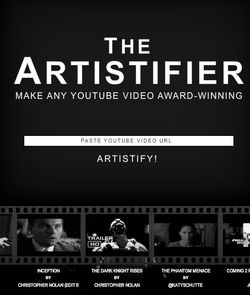 My friends over at Urgent Genius released a terrific little application last night during the Academy Awards called The Artistifier.

The Artistifier allows you to turn any YouTube video into an "award-winning" silent movie in the style the Oscar-winning film The Artist. You can even add your own captions before sending your finished black and white masterpiece via Facebook and Twitter.

I turned one of my speaker videos into Artist-style and it is really cool.

This is a terrific example of Newsjacking. The idea of taking something that is being talked about in the news and drafting off of it in order to get media mentions and social sharing is a fantastic strategy for real-time PR.

However, the vast majority of PR people are still in campaign-only mode. They focus on what's important to them and not what's important to the media and the public. If you think in real-time and create content that is valuable for the moment you can use Newsjacking to get ink and shares. Sometimes you can get a lot.

If you're going to the South-by-Southwest interactive festival in March, you can hear me speak about Newsjacking. Stop by and say hello.

In addition, the team behind The Artistifier will be at two SXSW panel discussions: