I've been following the Occupy Wall Street movement with interest. What started as a small group has grown remarkably quickly and protest elements are popping up all over the world. 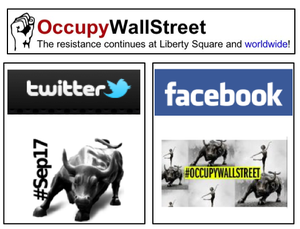 The Occupy Wall Street movement is using at least three different logos. This is a problem for people to know who you are and what you stand for. When I go to the site the logo is different than the one on your @OccupyWallSt Twitter feed which is different still from your Facebook page.

Try to come up with one iconic image and go with that on all of your social sites and printed material. Make that onto buttons and T-shirts. Design matters.

Put a face (or faces) to your organization

I know that one of the tenets of Occupy Wall Street is that it is a horizontally organized movement. I get that. But I think the movement needs people who become the human face of what you are doing.

Because you don't have a recognized human face as your voice in the media, journalists latch onto people such as the woman who was pepper sprayed or the women showing their bare breasts. Those images of people won't let you move beyond where you are today.

You say that you model your movement after the Arab Spring tactic. Take a page out of their playbook and find your Wael Ghonim. During the early 2011 Egyptian protests, Ghonim became the international face of the Egyptian Arab Spring. The media wants to put a face on Occupy Wall Street. Don't let them default to naked girls.

The Occupy Wall Street website has the same flaws as the media approach – lack of personality. When I go to the site, it is completely anonymous. The posts are by "OccupyWallSt" rather than a human (which is just like the terrible problem many bloggers have of using the default byline of "admin" when they blog). The contact information is anonymous too.

The reason this is such a big problem from a marketing perspective is that your movement seems to be anti-corporate. Certainly it is anti-big financial institutions. But what do the big banks do on their web site? Yep, they make them anonymous. You can't find any humans. There are black holes for contact information.

Don't copy the banks! Do the opposite. Make your site human.

The site needs to highlight the individuals who are leading the organization. I'd suggest that each and every day you profile one of the movement's people. Include a photo and a video interview. Let us see the humans behind the movement.

Clearly articulate what you want

Every successful movement clearly says what they are after: Giving women the right to vote, ending apartheid, overthrowing the Mubarak regime.

It is not clear exactly what Occupy Wall Street wants.

Do they want the Glass Steagall Act reinstated so that once again commercial banking and investment banking would be separate?

Do they want to create a limit to the amount of long-term investment income people can take on their personal income taxes? Today, Hedge Fund managers take as income the profits from the gain of their portfolios under management at the long-term capital gains rate of 15% while those who earn income from, say, running a restaurant pay the ordinary income tax rates which are 35% at the top end.

Should a teacher pay more tax as a percentage then a hedge fund manager? That is the sort of clearly articulated idea the Occupy Wall Street protesters could grab a hold of. So far they have not.

For more on concrete solutions that the Occupy Wall Street protesters could get behind, check out Matt Taibbi’s article in the October 27, 2011 issue of Rolling Stone.

Attention Occupy Wall Street – marketing and public relations matter. Sleeping in parks and chanting will only take you so far.