What is U.S. Presidential Candidate Cory Booker a Passionate Fan of? 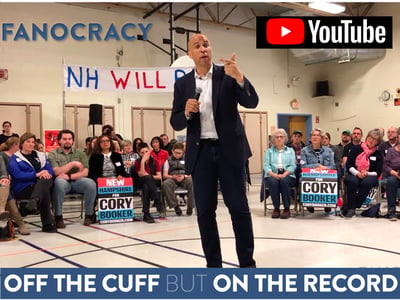 Cory Booker is a U.S. senator from New Jersey and Democratic candidate for president. He is one of more than 20 presidential candidates I've had an opportunity to visit with in New Hampshire. I’ve asked candidates a simple question: “Outside of your work and family, what are you a passionate fan of?”

Cory Booker can count himself as a Division I college football player, the subject of award-nominated documentaries, a fluent Spanish speaker, and a guest actor on shows such as Parks and Recreation.

Fresh out of Yale Law School in 1997, Booker did not take the path to a big law firm like many of his peers but instead moved into a public housing project in Newark, NJ. While there, he teamed up with the other tenants to take on a slumlord accused of intentional neglect of the property and won. In 2006, Booker was elected mayor of Newark with 72% of the vote, and in 2013 he was elected to represent the state of New Jersey in the United States Senate. Two decades after arriving as a young law school graduate, Booker still resides in Newark. In the video below, Booker shares his love for Newark — his home and his passion.

While Booker’s response may not be as surprising as some of the other candidates’ answers, I was impressed with his passion. Of the more than twenty candidates I’ve seen live and in action in front of voters, he is the best orator, and for that reason alone this short video is a must see.

What are the presidential candidates fans of?

At the town hall events I've attended, the vast majority of questions are predictable. The same is true at the debates. Candidates are asked about the issues of the day such as climate change, income inequality, taxes, healthcare, the opioid crisis, and so on. Each candidate has already worked up the answers to these questions. Heck, you can find the answers on their websites!

But our question about what they are a passionate fan of is unusual. They aren’t ready for it. After we pose the question, candidates frequently pause to think. You can feel the tension as they consider how to answer.

My daughter Reiko and I thought it would be fun to learn what the Presidential candidates are a fan of. It’s a question they’ve never been asked on the campaign trail, until now!

We've been to see all of the top 10 Democratic Candidates and also went to a Donald Trump MAGA rally (although he did not take Q&A).

You can find more candidate Q&A on their passions here.

Reiko and I are co-authors of Fanocracy: How to Turn Fans into Customers and Customers into Fans, which will release January 7, 2020 from the Portfolio division of Penguin Random House.