The Woman Card on Kickstarter is Awesome Newsjacking of Donald Trump

Written by David Meerman Scott on May 5th, 2016 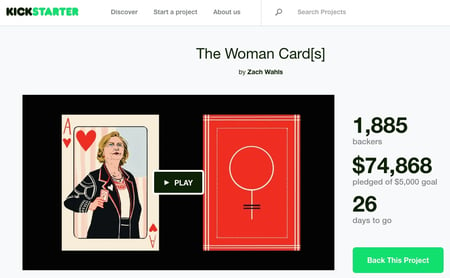 On April 26, 2016 Donald Trump said in a speech after he won the New York Republican Presidential Primary: “If Hillary Clinton were a man, I don’t think she’d get five percent of the vote. The only thing she’s got going is the woman’s card.”

This led Zach Wahls to create a Kickstarter project a few days later to sell his deck of Women Playing Cards. He and a partner created original designs featuring prominent women including pioneers in their fields, ranging from politics to music to science to humanitarian work. The cards will include Hillary Clinton (Ace), Ruth Bader Ginsburg (King), Beyoncé (Queen) and others such as Clara Barton, Amelia Earhart, Harriet Tubman, Susan B. Anthony.

No word on who the jokers will be(!)

Newsjacking is the art and science of injecting your ideas into a breaking news story to generate tons of media coverage, get sales leads, and grow business. This is a cool example because Hillary Clinton immediately commented on Donald Trumps speech and soon after, an entrepreneur had launched a cool new product. Newsjacking all around.

As I’ve written about several times, starting in August 2015, Donald Trump is the most real-time of all the presidential candidates. He is the Real Time Marketing Master that the Pundits Dismissed. While other candidates like Jeb Bush spend tens of millions on tradiational advertising, Trump communicated in real-time and the news media paid attention.

We’re witnessing a marketing and communications revolution. Real-time communications are immensely powerful. It can launch a product like Women Cards, it allows one candidate to respond to another instantly, and it can propel somebody with no political experience to the top of heap.

You can succeed as well. But you need to develop a real-time mindset.

Hat tip to my wife Yukari Watanabe Scottfor sharing this with us.