The hype-o-meter around the term Web3 has accelerated in recent months. I’ve heard from people who wonder what the new way of organizing data and content might mean for them. Here is a high-level overview of where we’ve been for the past 30+ years and where we might be heading in the next decades.

Web1 was the early era of the public web. Email became widely available in the early 1990s and with Web browsers like Netscape in the mid-1990s the web became easily accessible.

The dawn of the online world meant that individual users and companies had to figure out how to get online and do much of the work themselves.

To get my first personal email address around 1993, I physically drove my car to a scruffy office in the next town, got a dodgy looking floppy disk with some software on it, and paid a monthly fee to a small company for a dial-up email address. It took a bunch of fiddling with computer settings to set it up. I still have that address today (now part of Earthlink) which I use as a backup.

In the early days, a company website also meant a lot of mucking about with servers and settings. I remember hiring a “Webmaster” to set up and run websites for the company I worked for at the time. The Webmaster was in charge of a server (located under his desk) and he did all sort of mysterious things to make it run. In the mid-1990s, when I need to update a web page, I had to work with the Webmaster to get the page posted.

There was a bit of the Wild West to Web1. It was tough to get going, like staking a claim. There were entrepreneurs willing to help but most were small businesses. You were on your own.

Web 1 pros: For the first time in human history, we could be connected to one another, all over the world, in real time. What an exciting time to be alive!

Web1 cons: It was tough to get set up with an email address. Building, updating, and maintaining a website required technical and coding skills.

Starting around 2005 or so, the consolidation of online activity under a few huge technology companies including Google, Microsoft, Facebook, and others made it super easy to set up a web presence.

Now it takes moments to set up a new email address. You can be online in seconds, the time it takes to create a social media feed on LinkedIn, Facebook, or Instagram. An attractive website can be built in an hour or two by somebody with no coding skills.

While it is way easier to get online, putting your personal and business life into the hands of huge companies is risky. You are at the mercy of whatever the big company deems is in its best interest (whatever will make the most profit).

Web2 pros: Web2 completely transformed marketing from expensive offline advertising to online content creation, something I wrote about in my 2007 international bestseller The New Rules of Marketing and PR. To date, New Rules has sold nearly 500,000 copies in 29 languages and the new 8th edition will release in early May. Now, organizations large and small can reach buyers instantly with content they create for free.

Web2 cons: I see several huge problems with Web2, mainly resulting from the big technology companies focus on making a profit for shareholders. At any time, they can do whatever they want and that could disrupt your online presence. A tech company can eliminate a network outright (remember Google Plus? 50 million users and Google just shut it down). A change in an algorithm can mean your content is no longer seen (unless you pay for “boosting” or some other paid advertising program).

And there is a bigger problem for humanity with Web2: the social network algorithms. The Facebook algorithm, for example, leads tens of millions of its 2.7 billion global users into an abyss of misinformation, a quagmire of lies, and a quicksand of conspiracy theories. That’s why I call it the most destructive technology ever invented. 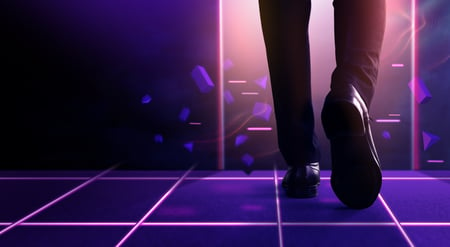 We are entering a new age where people and organizations can bypass the huge tech companies. We’ve got the possibilities of a decentralized network like Web1 but with more of the ease of Web2. The payment structure for Web3 is moving to digital tokens.

It’s already important to own your own content real estate and will be even more so in the Web3 future. You need a website, and you might look for other places to set up an outpost such as the decentralized social networks that are starting up. While the big social networks like Facebook aren’t going away, it’s getting more and more risky to rely on them for marketing or e-commerce.

A Web3 future might also include 3D virtual reality components, often referred to as the metaverse.

I suspect that the future will bring a decentralized social network built on blockchain where every user controls his or her data and can choose to sell or buy attention (or not). In the same way that the blockchain is disrupting the banking system by bypassing it with cryptocurrency like Bitcoin and others, a new way to organize social connections is possible.

However, a network like this will take years to amass a critical mass of users.

Distributed social networks might arise with blockchain providing identity services. Imagine a large and popular social network that is not owned by a corporation like Facebook or Twitter, companies that now monopolize aspects of how we communicate. Decentralized social networks already exist but to date have few users. For example, Mastodon was created as a free federated social network like Twitter, but that does not rely on a central server system. I first wrote about Mastadon in 2017: Mastodon Is Better Than Twitter But You Should Ignore It.

The problem is creating critical mass. It will take a really long time for any blockchain-based competitor to have enough users to be viable.

Here are a few other thoughts on what might be on the horizon with Web3:

1) Content could be sold directly and easily from content creators to content consumers. This means it will be possible for movies and songs and ebooks and photos to be easily sold directly, potentially bypassing services like Netflix, Spotify, Amazon Kindle, and Getty. Yes, there will likely still be a need for some kind of directory of content, but the actual financial transaction from creator to consumer might be on blockchain.

2) Related to the selling of content directly to consumers, news could be monetized down to the story level, bypassing the need to subscribe to a content feed. So instead of paying $100 for an annual subscription to the digital version of the Washington Post, the publication could offer individual stories for 1 cent or 5 cents or 10 cents. Depending on the nature of the story, the fee could fluctuate. News stories that are current from today could be one fee while stories from a year ago could be different. Want video or photos with your story? That could be priced separately.

3) Consumers could sell their attention to advertisers, potentially bypassing the ad networks like Google AdWords. Imagine that every time you see an ad, you’re paid a small amount of currency. Depending on your demographics it could be a fraction of a cent (for a general consumer seeing an advertisement for a commodity product), a few dollars (somebody who has expressed interest in buying a new car) or hundreds of dollars (a purchasing manger at a Fortune 500 company). This is non-trivial to establish, but so was Google when it started several decades ago.

4) We might be able to solve the email spam problem! Spam happens because it is free to send an email, so there is no cost to send a million emails or a hundred million. Imagine a world where it costs one tenth of one cent to send an email. Perhaps consumers can use a token payment as a kind of "do not spam list". For regular email users that cost would be a small amount of money per day. Recipients could earmark their windfall to a favorite charity. But the bad guys’ business would be shut down instantly.

Web3 is coming but it will be a long time before Web2 is disrupted. In the meantime, be aware and start to experiment.