The Underwriting: A VC-Backed Novel Shows an Alternative Way to Launch a Product

Written by David Meerman Scott on May 6th, 2015 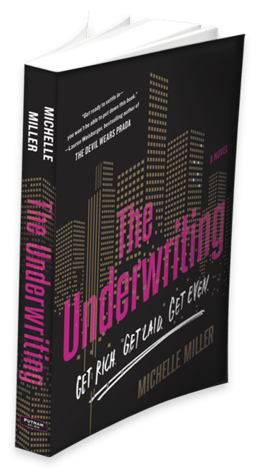 When you’re new to an industry, you don’t have to play by the rules. You can make up your own or apply ideas from your past experiences.

That’s exactly what Michelle Miller did to publish The Underwriting, her first novel releasing later this month.

Rather than submit to agents and publishers, the way “everybody knows” that you get a book published, Michelle drew upon her experiences earning an MBA at Stanford and working as a banker at JP Morgan to create a company around her intellectual property. She recruited investors and developed a clever way to showcase her content.

Get Rich. Get Laid. Get Even.

The Underwriting releases May 26 and is a satirical thriller described as The Social Network-meets-The Wolf of Wall Street. The book’s cover reads “Get Rich. Get Laid. Get Even.”

I was lucky to get an advance copy and from the first page I was hooked (in more ways than one – the fictitious company profiled in the book is called “Hook”). I devoured the book in several sittings.

The action centers around the IPO plans of a hot geo-location online dating startup. Imagine if Tinder were to go public and you were on the inside watching the sleazy bankers, greedy VCs, earnest programmers, and full-of-themselves founders and you get the idea of the book. Delicious mayhem ensues.

The Underwriting is a guilty pleasure read and I loved it. In many places the book is hysterical. Michelle nailed the characters – I felt I knew them. In fact, I found the book and the story about how it was published so compelling that I met up with Michelle when I was in New York to discuss it.

How not to publish a book the traditional way

The Underwriting was initially published serially on a purpose-built website. The action in each of 12 segments - which took about 30 minutes each to read - was accompanied by music, artwork, brand sponsors and other experiments in digital presentation.

Beginning on March 5, 2014 a new episode of The Underwriting was released each Wednesday at midnight EST and each was free for 24 hours. If you missed the free window, episodes could be purchased in kindle, tablet and audio formats for $1.50 each.

People who purchased the episodes got extra perks from weekly brand sponsors – things like discounts on workout classes from GoRecess, free shave kits from Harry’s, and deals at HotelTonight. All the brands were selected as highly relevant to the world within The Underwriting, and the site showcased how a character might use said brand.

In an interesting multi-media twist, there were music mix playlists created each week that reflected the emotional tenor of each week’s episode. Michelle’s partners linked up MixCloud to get them streamed through the site.

The wrong way is sometimes the best way

All of these unusual efforts built a fan base for the content and generated buzz for Michelle. This led to meetings with agents and publishers and a six figure book deal with G.P. Putnam's Sons. As I write this, before the book is even released, there are local language versions sold in nearly 20 countries. And Hollywood is sniffing around too.

Of course it’s not just publishing a novel that can be done using unusual methods. For example, crowdfunding through services like Kickstarter, while now much more common, was a unique approach to bringing a product to market and produced results for many organizations.

As you plan how to best get your offering into the market, consider how you can take a page out of Michelle’s playbook and get it into the hands of your fans first.  Think about the way that “everybody knows” you should do it and perhaps do something completely different.