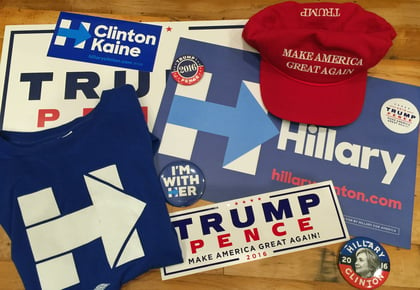 Election day is upon us. Finally. It’s been, like, forever. Most Americans - indeed most of the world - has had more than enough of the back and forth of this contentious campaign season. While many are fed up, I’ve enjoyed it immensely. I’m fired up.

This election is historical for both sides. The first woman running from a major party is running against an opponent with no political experience.

I’ve just returned home from seeing President Obama stump for Hillary Clinton this afternoon. How cool is that? No matter your politics, it’s always an honor to be in the same room as a sitting president. I absolutely loved the last story of Obama’s speech. This is a masterclass in how to work a crowd. It starts slow and builds. It’s funny and has an important message. It ends with a pitch for Hillary. Watch the video starting at 28:40 if you have 8 minutes.

Observations from a dozen campaign rallies 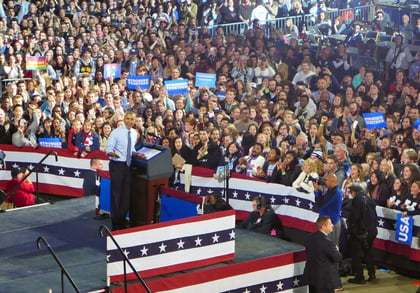 At the many campaign events I attended, I had opportunities to speak with a wide variety of Americans.

People I spoke with believe in the greatness of America. They believe that American leaders can help people.

During the primaries, I met undecided voters who were sizing up several candidates. Some had seen ten or more candidates speak in order to make up their minds. Yes, New Hampshire voters are privileged in this way and I’m lucky to live so close to the action.

At two different Trump events and three different Clinton events I attended, I had an opportunity to meet with very passionate supporters of each candidate. While the media portrays partisan supporters, especially Trump supporters, as angry and even violent, for the most part I spoke with people who are just trying to make a better life for them and their families.

While in line to go through the Secret Service protocol at a Trump event, I met an Iraq War veteran who lost a leg while in the Army. He strongly felt that Trump could help him more than Clinton. While on the rope line at a Clinton rally, I met a mother and daughter who were convinced that Clinton could help them more than Trump. Today at President Obama’s event I met a woman who confided in me that the men she knows in her town of Salem, NH put Trump yard signs on their lawns, but the wives are all voting for Clinton. These supporters had sized up both candidates. They made an effort to understand the other side. And they made their choice.

But I also met people at Clinton and Trump rallies who were closed minded and who simply repeated campaign slogans when I asked why they supported a particular candidate. “He will make America great again.” “She is the best qualified to become President.”

I did experience some outright hostility. At a Clinton event, Sanders supporters shouted down Clinton as she spoke. At a Trump rally, supporters cried “Lock her up!” and “CNN Sucks!” 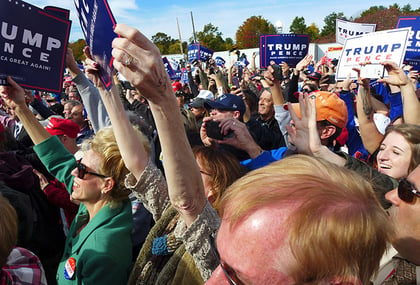 Here are some marketing takeaways:

1) This has been a “fear election”. People are scared of what will happen to the country if the other candidate wins. Both Clinton and Trump played on those fears in the debates, in their speeches, in their solicitations for donations, and in their advertising. While Barack Obama won on “Hope” in 2008, no matter who wins tomorrow, this election will be won on fear. Fear of the other candidate.

2) The strategies of the past didn’t work in 2016. Early Primary frontrunner Jeb Bush was using the outdated outbound marketing playbook that got his father and brother elected president. He won just 4 electoral votes despite spending $139 million.

3) Bernie Sanders built a remarkable following and started a movement. His campaign raised an average of $27 each from nearly 7 million people. But the Sanders campaign was out of alignment with its supporters. The campaign failed to harness his supporters’ online passion for the good of his campaign. Worse, he failed to reign in dark online forces who trolled supporters of other candidates. His campaign invested way too much in traditional advertising rather than leveraging his online network.

4) Donald Trump is a brilliant marketer. His “Make America Great Again” (#MAGA) slogan was known to all. His reliance on just two strategies, one free and the other relatively low cast – Real-Time Twitter and mega rallies – won him the Republican nomination. The two strategies generated tons of awareness in the general election season too. In fact, Donald Trump generated more than $5 billion in free media, more than any other candidate. However, he didn’t have a solid local approach in target markets. In fact, near the end of the campaign, his campaign was actually paying people to knock on doors.

5) Hillary Clinton ran a thoughtful and careful campaign. She worked every form of marketing: Advertising, in person events, social media, local office ground game. Her campaign made use of a remarkable one million volunteers. One volunteer I spoke with in New Hampshire described how she arrived at the local campaign office, met with campaign workers for instructions, and was given a printed list of the exact doors to knock on based on voter demographics. This integrated marketing approach is how campaigns are won.

6) The fractured mainstream media is too focused on the easy stuff like scandals. The media has become infotainment. With millions of news channels, the media sells the dramatic.

7) Both the Democratic Party and the Republican Party need to do some soul searching. The parties need to figure out what they want to be in the coming years.

8) Social media allows people to go to dark places and hurt people. Partisan websites can get people hopped up and some go trolling. It means many average people have become afraid to speak out.

If you are attending HubSpot’s #Inbound16 event, please consider swinging by my presentation Trump, Bush, Clinton, & Sanders: How Inbound Marketing and Inbound Sales Decided the 2016 U.S. Presidential Election on Wednesday, Nov 9, from 1:00 to 1:45. My talk is the day after Election Day! There will be a lot to discuss in just 45 minutes.