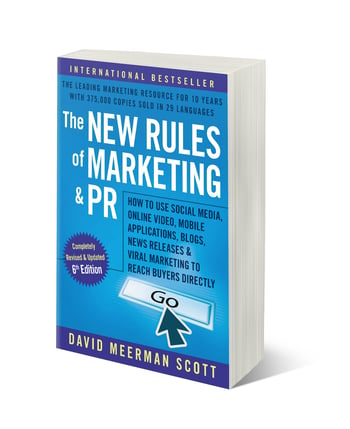 The first edition of The New Rules of Marketing & PR was published in 2007 and was six months on the BusinessWeek bestseller list. Since then the book has sold more than 375,000 copies in English in the various editions and is now available in 29 languages from Albanian to Vietnamese. Hundreds of colleges and universities around the world use it as a text in class and many companies require all marketing and PR staff to read a copy. I’m excited that the newly updated 6th edition is out in the next few days in the USA and will soon reach other countries around the world.

The new 6th edition includes a dozen fresh new examples of success. I’ve also updated many of the existing case studies that appear throughout the book.

I’ve added sections on some of the important new services that have emerged since the previous edition including Facebook Live and Snapchat.

I also revised and streamlined the book to make it more readable. To be honest, it got a little bloated over the past decade. I removed a bunch of content that just wasn’t important enough resulting in a book that’s about 30 pages shorter than the 5th edition.

The 6th Edition of The New Rules of Marketing & PR from David Meerman Scott on Vimeo.

Many thanks to all of you who have read earlier editions. One of my greatest joys in life is hearing from people who have transformed their business and changed their life as a result of the ideas in The New Rules of Marketing & PR.

While I’m proud that my ideas sparked something, it is you who did the work to change your mindset on how marketing and public relations have changed and it was you who implemented the ideas.

We’ve certainly come a long way together in the past decade!