The Longhairs Create a Vibrant Community Via Their Blog 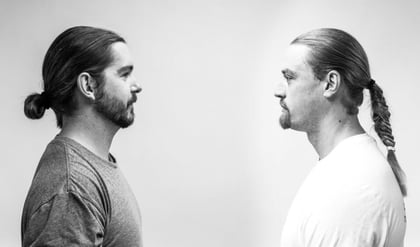 “Slacker. Hippie. Freak. Get a job. You look like a girl. Unprofessional!”

After hearing all sorts of snide comments about their long hair, Chris Healy and Lindsay Barto founded The Longhairs, a global community for men with long hair, to advocate for, educate, and celebrate men with long hair. “Because longhairs are badass. From Samson to Jesus to George Washington, real men let it ride. Don’t let ’em convince you otherwise,” their site says.Chris and Lindsay realized early on that women are indoctrinated from birth on how to care for, style, and manage long hair. But men haven’t had that luxury. So they created a blog to serve an unmet need. And now that they’ve got a vibrant community on the back of their popular blog, they are starting to sell products, initially Hair Ties for Guys.

“Content is absolutely the cornerstone of our community,” Chris says. “In fact, we began with no product or, really almost anything at all. We just started with three or four blog posts and we had a pretty good idea that there would be lots of content that we could come up with. I think the first four blog posts were ‘Long Hair at High Speed’, ‘Six Tips for Guys with Long Hair’, and a couple of other just real basic ones. But we decided from the very beginning that content was going to be the backbone of our community and our business.”

The site is beautifully designed which makes total sense considering that Chris and Lindsay also run Round Two Creative Group, a creative studio in San Diego, CA. The blog content is front and center on the homepage of the site. As I write this, they’ve blogged every week for more than 100 weeks.

A blog to advocate for, educate, and celebrate men with long hair

For example there is a conversation with Dave Littlechild, a successful business professional from the United Kingdom who’s besides having long hair, has lived around the world building businesses, most recently as Executive Vice President for dotmailer, the largest email marketing software firm in the UK.

The educational content of the blog is focused on the realization that men don’t grow up learning how to care for long hair like women do. “We’ve got no idea what to do or how to brush it,” Chris says. “Is it okay to do a ponytail or how do I braid it? None of these things we know about. Before The Longhairs, the only place to learn was women’s blogs, websites, magazines or asking our moms and our sisters about it. And frankly, some of the videos can be a little uncomfortable for men to watch. We help guys by teaching them hey, you don’t need to be a hair expert but there are a few things every guy with long hair needs to know. We got it. You need it. Here it is. Let us help you out and show you how to do these things. And you know, since probably very few people are encouraging you to grow your hair out, you’re probably not celebrating it with your mom or with your buddies or your sister. So we have some fun with by celebrating on the blog with ‘Hair Whip Wednesdays’, and ‘Famous Long Hair Fridays’. You know, it’s a club and it’s a community; and we should celebrate it. So we do that with our Celebrate Style content.”

Many of the new visitors to the community come through search and as Chris and Lindsay poured through their stats they realized that people were coming from some of their more unusual posts. “We wrote a blog post about a year and a half ago called ‘The Uncomfortable Truth About Awkward-stage Hair’ that documented that phase when a guy starts to grow out their hair between about four, five, six months until about a year and a half,” Chris says. “Man, it just looks bad. There’s nothing you can do about it. But that’s part of why long hair is a minority among men because you have to get through that awkward phase. It turns out a lot of guys are searching for information on awkward stage hair: how to deal with it, how to accelerate it, how to make it go faster. Now, if you Google ‘awkward stage hair’, we show up in the number one position.”

While the blog is the primary content on the site, Chris and Lindsay also publish videos, do podcasts, and use photography. The content drives people into a place where visitors can get updates via email and that makes them a part of the community of Longhairs.

Products for guys with long hair

The flagship product of the Longhairs community is Hair Ties for Guys. “That was the original idea before The Longhairs even existed or was an idea,” Chris says. “We were thinking ‘Hair Ties for Guys’. Man. We need that. It sounds good! It tells you what it is. It’s sticky. You’re not going to forget that!”

Once the community launched, they started work on Hair Ties for Guys. It involved a great deal of product testing and searching for manufacturing sources, but after more than a year they released the first offerings. Today they have six collections of Hair Ties for Guys.

“We have some fun names including the Outdoorsmen, the Kokomos and the Up All Nighters,” Chris says. “Instead of what you would find in the women’s hair care aisle - pastel colors and maybe some more feminine designs with flowers - we do rocket launchers and shotgun shells, camouflage, surfboards, fishing rods, and stuff that guys are in to. And guys love them. The reach has been extraordinary. We have now shipped Hair Ties for Guys to 47 states in the U.S. and 36 countries around the world.”

Now that Hair Ties for Guys is doing well, Chris says he is looking at new products to offer his community.

The potential market for his products is huge. Chris cites estimates that suggest men with long hair are somewhere between three percent and five percent of the population of the United States. If you then include men who live in other countries with disposable income, the target market is in the tens of millions.

Content sells products to guys with long hair. There’s no doubt that content in the form of a well written blog targeting a specific audience has the power to sell your product or service too. It's about aligning your marketing with the way that people buy.