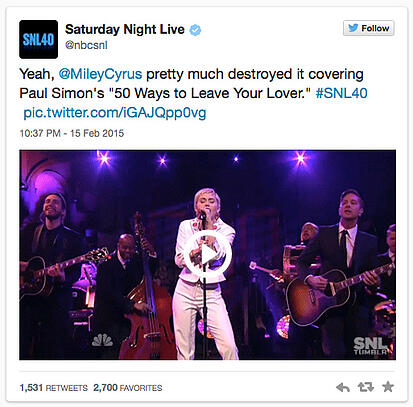 I was 13 years old when Saturday Night Live premiered in 1975. While I remember staying up to watch some episodes of the show’s first season, it was a few years later when I was in High School that I became a fan. I’d come home after an evening partying with my friends and my parents would be asleep, I’d be properly mood adjusted and I’d crack up at the zaniness. It seemed the actors were of my generation and we were on the inside of the jokes.

While I never watched every episode after my high school years, I did catch enough of the show here and there over the decades to follow the various new casts, hot musical acts, and interesting choices of guest hosts.

So it was with anticipation that I looked forward to the 40th anniversary show aired on Sunday. I was on the road that day and couldn’t watch #SNL40 live, so I finally caught it last night.

Sure it was fun to see the snippets of vintage sketches featuring original cast members like John Belushi. Many of the live versions of classic segments including “Weekend Update” (featuring Jane Curtin, Tina Fey, and Amy Poehler) and Wayne’s World (Mike Myers and Dana Carvey) were excellent, but some were not. A few of the stars killed (Jimmy Fallon and Justin Timberlake had a great cold open for example). But some of the comedians including Chevy Chase and Eddie Murphy were not at all funny. Musicians Paul McCartney and Paul Simon did okay and Kanye West was interesting mainly for his unusual staging.

Miley Cyrus was fantastic! She stole the show. I loved her sultry, fresh, and unusual take on Paul Simon’s ‘50 Ways To Leave Your Lover’. I loved it so much I’ve watched it ten times (so far) in the past 20 hours.

I was not a Miley Cyrus fan before this, but now I am. If she were to do an album and tour of covers like Cyndi Lauper, I’d be all over it. The woman can sing! And what amazing command of a stage.

If you haven’t seen the clip, don’t watch the crappy pirated YouTube versions. Instead go to the official NBC SNL site - this link takes you to the second half of the 3.5 hour broadcast. You’ll have to watch an ad and then find the Miley Cyrus part, which comes up at about 40 minutes.  You may need to watch another ad before it plays. Go ahead and watch and then read the rest of this post…

Marketing Lessons from Miley Cyrus on #SNL40 for organizations

Here are a few thoughts about what the choice of Miley Cyrus meant for #SNL40 and what we can learn about that for our organizations.

Safe is Risky – Lorne Michaels and the SNL team could have slotted in another vintage act into this music slot. Tons of artists would have loved to appear. But that seemingly safe choice could only achieve a “B” grade. Going with an unusual choice in Cyrus meant that the surprise factor alone gets people to pay attention. Yes, she could have bombed. But she killed for an A+ grade. Many times in business the unusual move is the right move while “safe” is the more risky approach.

Embrace your Millennials  – Saturday Night Live was already in season 17 when Miley Cyrus was born in 1992. What does she know? What do the Millennials at your company know? A lot! Of course on a show celebrating the 40th anniversary of SNL there needs to be a bunch of oldsters. But getting new blood in was the right move here and may be in your business too. If all the decisions at your organization are made by the grey hairs, you’re missing out.

Marketing Lessons from Miley Cyrus on #SNL40 for you

Miley Cyrus has developed a compelling personal brand and all of us can learn from what she’s done over her short but interesting career.

Be your own person – Miley Cyrus grew up as a Disney star, becoming famous as Hannah Montana, a role she took on as a young teenager in 2006. The show was written and produced for her, so she was a hired employee. Four years later, she broke out of Disney and became her own person. She crafted her own image and pushed the envelope with her videos. She became highly controversial and many people dismissed her as yet another airhead pop tart. But she was much more than the others that have burned out or descended into a life of riotous living. By showcasing her independence and personal style, she became a much bigger star than Disney had made her. You too have an opportunity to shine in a world of your own making. There are so many opportunities out there if you want to bust loose from the corporate environment.

Embrace social networks – Cyrus has been very active on social networks, with nearly 20 million followers of her @MileyCyrus twitter feed. She’s not all fluff, sometimes taking a stand on issues such as a tweet this week “This has to stop! RT @TransEquality 22 Year Old Ohio #Trans Woman Murdered By Father http://bit.ly/1AhGu3K   #lgbt”. She has an active Instagram with thousands of posts where she gives fans a glimpse of her private life. While we mere mortals won’t achieve anywhere near the number of fans as she, we can still reach our audiences if we put ourselves out there and share what’s important.

I’m so glad I caught #SNL40. There was some good stuff. But when the 50th comes around in a decade, the only thing I’ll remember of the broadcast is Miley.