The Grateful Dead used free content to build a social network of fans before Mark Zuckerberg was even born. They pioneered many of the ideas we now use in social media and content marketing.

Unlike other bands, the Grateful Dead encouraged concertgoers to record their live shows, establishing “taper sections” behind the mixing board where fans’ recording gear can be set up for best sound quality. When requesting tickets to a show, a taper would request a seat in the special section reserved just for them.

Every other band said “no!” while the Grateful Dead said “sure, why not?”

People attending a Grateful Dead concert for the first time were often surprised to see the forest of professional-grade microphones rising to the sky in the audience. Tapers, as these Dead Heads are known, were allowed to freely record Grateful Dead shows using their own equipment. Photography was also encouraged.

Despite the fact that people could get their product for free, the Grateful Dead found themselves playing in larger and larger stadiums as the number of fans swelled and, ironically, it fueled album sales, too: 19 gold albums, six platinum, and four multiplatinum. 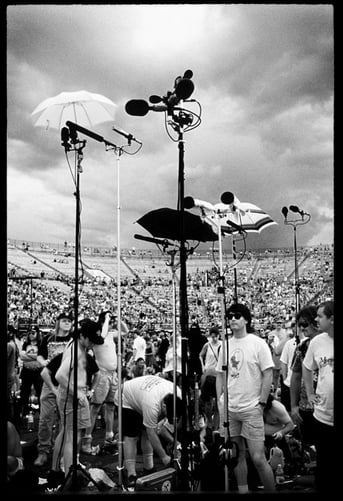 Allowing fans to tape concerts was highly unusual as conventional wisdom held that if fans taped concerts they wouldn’t need to attend them or buy records. The Grateful Dead rejected conventional wisdom. As a result of being exposed to the music that people recorded for free, many listeners became fans and fans wanted to see shows. The Grateful Dead became the most popular touring band in history, selling a billion dollars worth of concert tickets over their career.

Building a fan base

The Grateful Dead removed barriers to their music by allowing fans to tape it, which in turn brought in new fans and grew sales.

With the advent of the Internet, music fans suddenly had the ability to share music from any band via free download sites such as Napster. The recording industry cracked down, shutting down these sites and making it illegal to download licensed music. The Grateful Dead however, continued its tradition of allowing access to and trading of live recordings. In 1999, the Dead was one of the first bands to allow free downloads (i.e. MP3 files) of their live performances.  The Grateful Dead live music section on Archive.org shows over 10,000 concerts

Now, fifty years after their founding, the “core four” surviving members of the Grateful Dead are playing their final three Fare Thee Well #Dead50 reunion shows in Chicago this weekend. I’ll be there for all three shows. When put on sale several months ago, the millions of fans clamoring to be in Chicago this weekend broke Ticketmaster. Many people waited in virtual line for an hour before the system crapped out on them and said there were no seats left. In the secondary market, StubHub says that the Dead are the top show to see this summer, selling better than Taylor Swift and at a rate double that of the Rolling Stones, another act playing together for 50 years.

It’s not just rock bands that can give away their content in order to build a passionate fan base. Any organization can use this technique.

The way to reach your marketplace is to create tons of remarkable, free content like blogs, videos, whitepapers, and e-books. Giving away free content sounds counter-intuitive, but it works. This is because each piece of content you create attracts links in from other Websites. Those links send you traffic and those links inform Google how important you are and move that piece of content up the rankings.

In other words, each piece of content is like a mini-magnet that attracts potential customers to your business. The really nice thing about these mini-magnets is that they are cumulative. The pieces of content you create never go away as they continue to get links and rank in the search engines.

One comment I frequently hear from smaller companies, especially those that sell a service or a concept, is that if you give away your ideas “for free,” (i.e. via a blog, white papers, videos, etc.) buyers have no incentive to do business with you.

The exact opposite is true: when you give content or small pieces of your product away, it attracts a lot more interest and really opens up the top of your marketing funnel in a dramatic way. The problem you have today is that you don’t have enough leads. When you give away some content, you’ll have more leads than you know what to do with – along with a much higher “how to qualify” problem!

Ultimately, the company that regularly produces content and makes it free for the taking sees its revenues grow as “followers” become customers. It worked for the Grateful Dead – and it can work for you, too. I wrote about this idea in the book I wrote with my friend Brian Halligan, HubSpot CEO, Marketing Lessons from the Grateful Dead: What Every Business Can Learn from the Most Iconic Band in History, which released several years ago.

Great free stuff acts like a magnet as it both draws people to you and opens up the top of your marketing funnel in a dramatic way. I use this technique myself.

For example, I’ve given away the ideas in my book The New Rules of Sales and Service: How to Use Agile Selling, Real-Time Customer Engagement, Big Data, Content, and Storytelling to Grow Your Business as a Slideshare called The New Rules of Selling which has, to date, been viewed 194,000 times and has been shared over 4,000 times on social networks including Twitter, LinkedIn, and Facebook. I give away my ideas in order to generate interest.

You can do the same if you follow the ideas of the Grateful Dead.

Photo by my friend Jay Blakesberg and used in Marketing Lessons from the Grateful Dead.