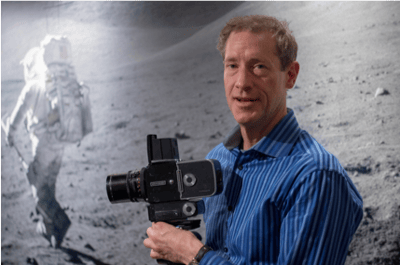 Apollo 11, the first lunar landing, was fifty years ago this month. It was the most audacious adventure humans have ever accomplished and deserves celebration. I’m particularly interested in how the contractors who worked on the project in the 1960s are marking the milestone, so we will look at three companies: IBM, Hasselblad, and Omega.

Alert readers know I am a massive Apollo geek! I have an Apollo museum in my home to showcase my collection of Apollo Artifacts; I wrote a book with Rich Jurek called Marketing the Moon: The Selling of the Apollo Lunar Program; I own the world’s largest collection of press kits from the Apollo 11 mission which I digitized and made available; and I am a Consulting Producer on the film Chasing the Moon premiering this week on PBS American Experience.

IBM: Computers to help land men on the moon 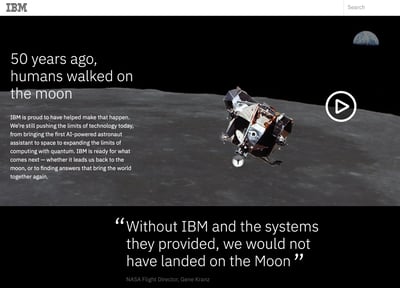 I find the IBM microsite centered on the Apollo mission fascinating because it is a consumer site from a B2B company. The site reads: "50 years ago, humans walked on the moon. IBM is proud to have helped make that happen. We’re still pushing the limits of technology today, from bringing the first AI-powered astronaut assistant to space to expanding the limits of computing with quantum. IBM is ready for what comes next — whether it leads us back to the moon, or to finding answers that bring the world together again."

Here's a link to my original IBM Apollo 11 press kit

Hasselblad: Cameras on the moon 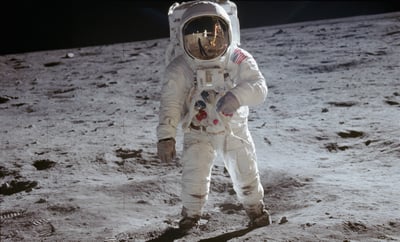 Swedish camera company Hasselblad has a long history with the space program prior to Apollo. Their excellent microsite Hasselblad in Space shares how photos were taken on the lunar surface: "What could be deemed as one of the most iconic moments of Hasselblad in space was when the Apollo 11 mission successfully landed the Eagle on the Moon on 20 July 1969, signifying humanity's first steps off our own planet. A silver Hasselblad Data Camera (HDC) with Réseau plate, fitted with a Zeiss Biogon 60mm ƒ/5.6 lens, was chosen to document the lunar surface and attached to astronaut Armstrong's chest. A second black Hasselblad Electric Camera (HEC) with a Zeiss Planar 80mm ƒ/2,8 lens was used to shoot from inside the Eagle lunar module. The HDC had never been tested in space before, adding to the pressure of this once in a lifetime moment. Would the one Hasselblad camera used to shoot on the lunar surface capture the results everyone was hoping for?"

Here's a link to my original Hasselblad Apollo press kit

Omega: The watch that flew to the moon 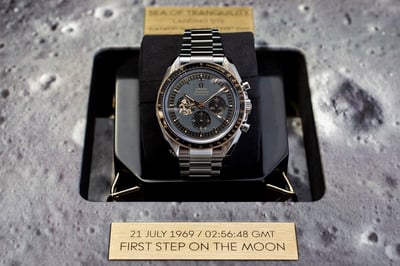 Apollo astronauts were issued Omega Speedmaster watches to use on the missions. Fifty years later, Omega created an anniversary edition of the watch. The microsite reads: "On the 21st of July 1969, Neil Armstrong and Buzz Aldrin stepped off the Eagle to become the first humans to stand on another world. To commemorate the 50th anniversary of that moment, OMEGA has crafted a new Limited Edition of 6,969 pieces inspired by Apollo 11." I find it interesting that this watch was priced at USD $9,650 and quickly sold out. On the secondary market, prices are around $15,000.

Here's a link to my original Omega Apollo press kit