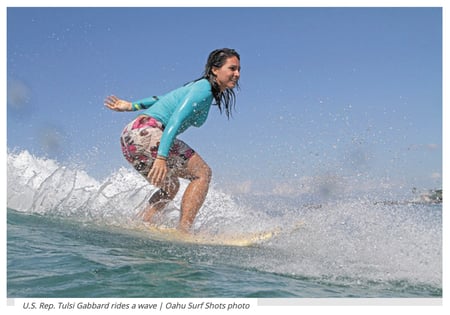 Tulsi Gabbard, a member of the U.S. Congress from Hawaii and candidate for President, is also an avid surfer. It says so right on her @TulsiGabbard Twitter profile: “Soldier. Veteran. Surfer. Congress. Candidate for President.” So when I had an opportunity to ask her a question at a town hall event in New Hampshire, I went straight to her love of surfing. Later, when I had a moment to speak with Gabbard away from the spotlights, she told me mine was the best question she’d ever been asked in her entire political career! That’s what happens when you get people talking about what they are a fan of.

The Gabbard town hall was one of 17 presidential candidate events I’ve attended (so far) during the 2020 election cycle. At each one, I’ve asked the candidate about their passions. Well, except for the Donald Trump MAGA rally I attended where there is no opportunity for a Q&A.

In this video, Gabbard tells us about how when she was 21 years old, surfing was an important aspect of why she first ran for office because she wanted to do more to help the environment so the beaches and oceans would be clean and marine life would be protected. She also shares: “On a deeply personal level, I try to get in the ocean as much as possible," she says in the video. "It’s magic, man! It’s magic. It’s hard to describe. The renewal you get from the ocean and across mother nature keeps us centered and connected to our planet.”

Gabbard, an Iraq War veteran herself, works with AccesSurf to give military veterans an opportunity to get into the waves no matter what their ability or disability. AccesSurf is a pioneer in the advancement of adaptive water sports, ocean recreation, and therapeutic instruction for people with disabilities throughout the state of Hawaii and worldwide.

What are the Presidential candidate a fan of?

At the town hall events I've attended, the vast majority of questions are predictable. The same is true at the debates. Candidates are asked about the issues of the day such as climate change, income inequality, taxes, healthcare, the opioid crisis, and so on. Each candidate already has already worked up the answers to these questions. Heck, you can find the answers on their websites!

But our question about what they are a passionate fan of is unusual. They aren’t ready for it. After we pose the question, the candidate frequently pauses to think. You can feel the tension as they consider how to answer.

My daughter Reiko and I thought it would be fun to learn from the Presidential candidates and as of this writing we’ve asked 16 candidates and have all the answers on video. It’s a question they’ve never been asked on the campaign trail, until now!

You can find more candidate Q&A on their passions here.

Reiko and I are co-authors of Fanocracy: How to Turn Fans into Customers and Customers into Fans, which will release January 7, 2020 from the Portfolio division of Penguin Random House.