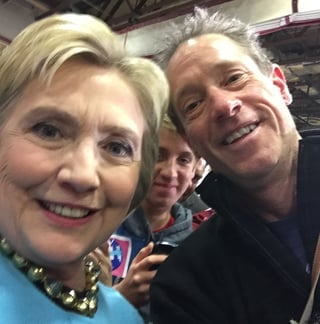 Selfies are a thing. Love them or hate them, they are a part of modern smartphone culture, no more so than on a Presidential candidate rope line. Hillary Clinton has figured out how to optimize selfies for social sharing. It’s a small but fascinating marketing technique!

Presidential candidates are constantly asked to pose for selfies on the campaign trail. The fact that they are at the event to win votes means they feel an obligation to take as many as they can.

But this can be time consuming if they’re working a rope line of hundreds because most people just aren’t experienced at taking a selfie. They take too much time, futz around with the best angle, and often end up with a blurry shot.

Hillary Clinton has perfected the art of the selfie. She shoots them herself! 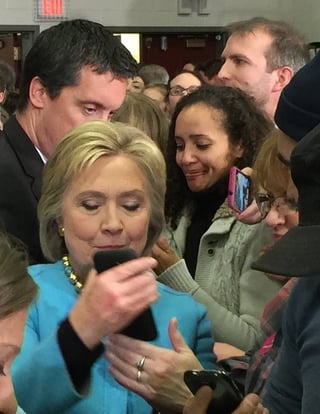 We arrived about an hour before the doors opened at the final Clinton campaign event of the New Hampshire season on February 8 in a raging snowstorm. We were about 20 people into the line so when we made it through the Secret Service checkpoint as doors opened we were delighted to find ourselves standing right on the rail, just a few feet from the stage. When the event ended, Hillary, Bill, and Chelsea Clinton all worked the rope line.

I was fascinated as I watched Hillary Clinton’s selfie technique as she got closer to us. When a person wanted a photo, Clinton would take the person’s smartphone herself, quickly find the best angle, shoot a few shots, and hand the phone back. It was impressively efficient - maybe five seconds a person. If she was asked to pose with a group of two or more people, Clinton would deftly hand the phone behind her to a waiting aide who would shoot the photo.

I had a moment to ask her about selfies and she told me she figures she's shot more than ten thousand.

By personally shooting the selfies, Clinton not only gets through the rope line faster, she also gives her supporters something to talk about on social networks. “Hillary took this photo herself!”

It's a fun little marketing technique that none of the other candidates used.

Donald Trump is the real-time master but Hillary Clinton is the selfie champion.