Because Facebook appears to be giving strong preference to Facebook Live broadcasts, when you use Facebook Live, the Facebook algorithm will often give your broadcast priority by showing your feed in real time to your friends at the top of their timelines.

A picture may be worth a thousand words to tell a story at a distance, but live video brings your followers right along with you in the moment.

Facebook Live turns anyone into a citizen journalist. Indeed, news outlets are using Facebook Live too – allowing their reporters to instantly upload live video between their more formal broadcasts or written stories.

And for marketers, live streaming opens up the possibility of sharing all kinds of information that can serve as marketing for you or your company.

A live operation at a hospital, a tour of a home for sale, a peek backstage at a rock concert, a manager’s pep talk before the big game, or a product design meeting at a company all become shareable in an exciting and intimate way.

Reaching tens of thousands of people with Facebook Live 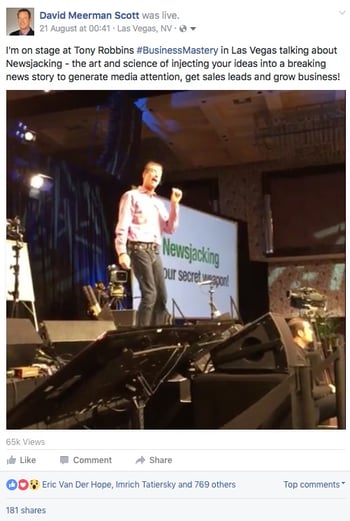 On Saturday I delivered a 2-hour talk about new marketing at the Tony Robbins Business Mastery event in Las Vegas. A 20-minute segment of the talk was filmed in Facebook Live using my iPhone and broadcast in real-time.

As people were seeing my live broadcast, they began to share on their own timelines and more and more people started to watch. Tony Robbins also shared with his nearly 2.5 million Facebook followers and soon there were over 10,000 people tuned into my Facebook Live broadcast.

Less than a week after the broadcast, it has shared by 181 people, liked by 770 people, and has some 65,000 views. What a wonderful way to share information with your existing followers and reach people who don’t know you yet.

Unlike almost every other form of content creation, it’s immediately online and sharable, promoting you or your business right away.

There are many marketing and PR uses for Facebook Live. I’m thinking that politicians, artists, musicians, chefs, authors, teachers, CEOs, and others in the public eye have a great opportunity to create stories about what they are up to.

Organizations could showcase how their customers use their wares, especially with highly visual products and services like sporting goods, cars, hotels, restaurants, hair salons, and the like.

When a news story breaks, Facebook Live can be an excellent way to do some newsjacking, getting your take on the story into the marketplace instantly to generate tons of media coverage, get sales leads, and grow business.

Please let us know via the comments below how you are using Facebook Live.

Back to the Basics: The Story Customers Tell Themselves

Your Big Decisions May Require The Rocking Chair Test