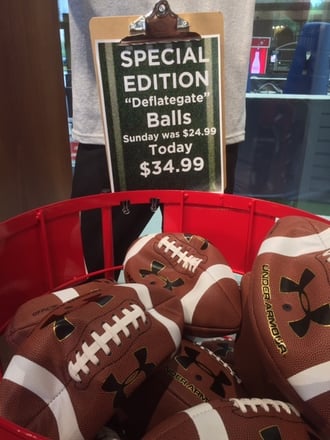 Yesterday afternoon I presented at the Leadership Summit sponsored by Fortune Magazine. In the room were 650 entrepreneurs eager to learn ways to grow their business.

Since it was less than 24 hours after Super Bowl MVP New England Patriots QB Tom Brady was handed a 4 game suspension for his assumed role in the Deflategate scandal, I chose to use that as an important component of my talk.

As an added bit of fun, I am from Boston so I enjoyed being booed when I started to talk about Brady from the stage.

I spent about 20 minutes of my 75-minute timeslot discussing Newsjacking, a marketing strategy I developed and popularized with my book by that title. Newsjacking – the art and science of injecting your ideas into a breaking news story to reach buyers directly and generate tons of media coverage – has become a very popular technique to generate real-time attention.

Create a strategy in ten minutes

My talk focused on the idea of real-time marketing and sales. So that morning I devised a real-time exercise for the audience.

#Deflategate was at that moment one of the biggest stories in the US. There were 2,000 media outlets covering the news. So I had each of approximately 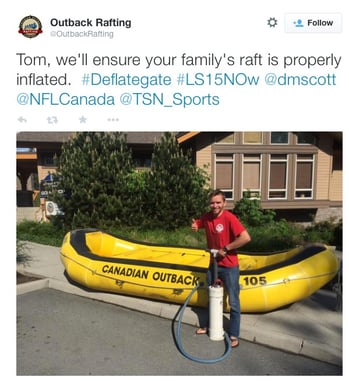 72 tables of 9 or so people each choose one of their companies and work together to devise a way to newsjack the #deflategate story. They worked at their table for about 5 minutes and then I asked about ten or so to share their ideas. Some were great.

I was especially excited when I checked my social feeds upon leaving the stage that several people had already implemented their work before my presentation concluded! Wow. That’s fast. Here are two of them:

Event Network, an operator of gift shops for aquariums, museums, science centers, botanical gardens, and other cultural attractions had one of their shops, in the College Football Hall of Fame, deflate their souvenir footballs! Nicely played indeed!

This was no mere academic make work project to kill time in my talk. The groups actually produced usable strategies for many of the companies in the room. At least a dozen organizations had jumped into #deflategate by the end of the day and at the cocktail recepption that evening people were buzzing about the strategy.

Hey, you too can create a marketing strategy in five minutes and implement it within the hour.