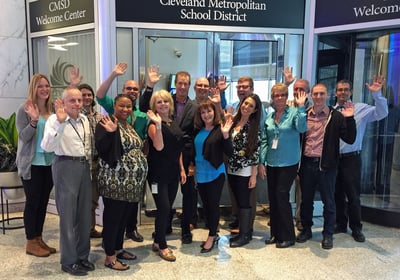 Recently I had an opportunity to meet with Roseann Canfora, chief communications officer for the Cleveland Metropolitan School District and spend a day with her entire team.

I led a session on Real-Time Marketing and PR but I think I learned more from them than they from me. It was an incredibly interesting to hear how CMSD deploys journalism techniques to communicate to students, parents, the media, and the wider Cleveland community.

This excellent example should be useful for anybody making the transition from traditional PR to the new forms of communications afforded by the ability to publish on the Web. Roseann operates what’s essentially a full time news operation including a television studio in support of CMSD and the wider Cleveland community.

Roseann leads a team of 12 people within two groups -- the news and information side of the house and the marketing and advertising side. The CMSD staff includes a multi-media journalist who came to the District from television and a TV station manager who was a teacher of television production for many years and has worked in education as a producer and station manager. The news director was a reporter for nearly 25 years for the Cleveland Plain Dealer including three of those years as a beat reporter. Everybody on the entire news team including Roseann comes from a journalism background.

The Cleveland Metropolitan School District serves some 40,000 students. Roseann’s team not only focuses on reaching the families of students, but also those who attend other schools or are considering doing so.

I was surprised by the importance of positioning CMSD vs the other education options available to families including charter schools, parochial schools, private schools, and home schooling that serve children across Cleveland. Many people think would think that a public school system doesn’t worry about “competition” but they must. That was eye opening for me.

“It’s our responsibility to let families know about the choices that they have in Cleveland,” Roseann says. “Unfortunately, we don't have much of an identity but that of a struggling, inner city school district if the people telling our stories are the local media. The urban journalists continue to fail in their social responsibility to tell the real stories, not the stories that are easy. The daily stories that big city journalists are drawn to include gang fights, low test scores, truancy, and weapons finding their way past metal detectors. These stories fall short of what I learned in journalism school was our social responsibility to tell the deeper stories, the root causes of these things, the incredible stories of triumph over those challenges that take place in schools every single day. Those are the types of stories we now tell ourselves.”

When she started at CMSD, Roseann inherited a virtually inert communications operation that was producing print materials to be taken home by students. Each school in the district also did their own communications, further diluting the CSMD brand.

“The buy-in took years because it meant disturbing the comfort level of thousands of people, people who felt very territorial. Well, that's my event. Why are you doing that? Or, that's my task. We do the mailers. Why are you doing that? We manage this content. Why are you taking it away from us? And even prying from them their love of ClipArt and WordArt and telling them to throw out their hot pink paper that they've relied on for years as the pretty marketing pieces. The pushback I was experiencing was coming school-by-school and department-by-department. But I had the buy in from the top for a clearly defined brand framework so I could set the boundaries regarding what stories are told, how they are told, and more importantly by whom.”

It was clear to Roseann that CMSD was not effectively reaching families until they approached marketing and advertising as a much bigger stream of content. “We had a need to cover stories that weren’t being covered by mainstream media and even the stories that were being covered by mainstream media but that were not getting to the heart of the story, the people elements, the challenging elements,” she says. “It meant creating a team of writers. It meant finding a multimedia journalist to go out with a camera and convey these stories in depth. It meant having social media specialists in every part of our team to write not only for our brand but also create content that will be interesting for the media. We’re looking for interesting stories, unique angles, and beating the local media to the punch by telling it better so that they see us as a thought partner and even a thought leader.”

A major challenge for Roseann was finding journalists who were eager to move over to CMSD and were willing to become a brand journalist. Many reporters are reluctant to join what they call the "dark side" of communictions - working outside of a media company. At the same time, there are many people with a marketing and PR background who are not qualified for the roles Roseann had available.

“I can clearly see the difference between a story and a story with credibility, one with facts, stats and all the elements of good journalism,” Roseann says.  “That is probably the greatest challenge in going the brand journalism route.  We’re telling our own stories, as journalists, and that’s different from a PR writer writing a bio about a new person, introducing a new product or a new way of doing things.  Readers see through it quickly if your content marketing reads more like selling and less like telling. Hiring trained journalists is key to establishing credibility in our news bureau, but having good reporters who love to tell good stories is what is making it work.”

To further complicate the hiring process, Roseann tries to bring journalists onto the team who know the Cleveland market and who have covered the news there. “What sold me on my multimedia journalist was her work as a news reporter at WKYC Channel 3 here in Cleveland and also as a news anchor in Michigan where the stories she always wanted to tell and the ones that were her favorites were taking place in schools. Our youngest and newest member of the news bureau was a crime reporter at the Plain Dealer. These are people who know our city. They know our families. They know our challenges. They know the poverty in this district, which has the highest number of children of poverty in the nation. If you don't know these people you can't really write about what's happening in their lives with any kind of meaning or with any kind of accuracy. So that is the strength of this team and so we are out there competing with the best of the journalists in the city and that was the goal from the start.”

Now CMSD delivers constantly across multiple channels to multiple audiences day in, day out. “This is the first year I can actually say we are a mobile, digital, multi platform operation where brand journalism, which was always my goal, works,” Roseann says.

Poking around on the CMSD news site offers some fun stories produced by the television team. For example, they produced a news story about how students at Design Lab Early College High School have set an example for makers across the country. The school had a special visit from Adam Savage, former co-host of the hit Discovery Channel TV series “Mythbusters.”

There’s a written story New school to have space at MetroHealth that shows how CMSD’s new Lincoln-West School of Science and Health will be based partly at the MetroHealth System’s main campus. District and hospital leaders believe the school, which will open July 25 with ninth- and 10th-graders, may be the only one in the country located within a hospital.

Roseann is currently working to hire an individual who understands the metrics associated with the site and social channels. “Incorporating the analytics into the brand journalism strategy is the only way to know if we are truly engaged,” she says. “We must use analytics to develop our strategy based on how many page views people are spending on a school site versus the district site, comments they’re leaving, how they share on social networks, and all of that.”

I’ve been writing about brand journalism for more than a decade. Roseann’s example of success at CMSD is among the most interesting I’ve encountered in looking at hundreds of organizations implementing this strategy. It’s exciting to see what’s possible for any organization.

Back to the Basics: The Importance of Buyer Personas