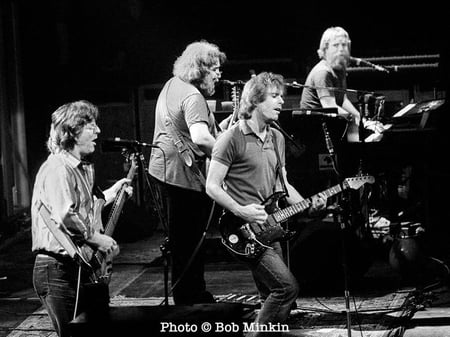 There are fans. There are super fans. And then there are the most ardent and extreme fans who live their life looking for opportunities to engage with what they love. Yes, I admit I am one of them. I love the Grateful Dead.

I’ve been to 84 Grateful Dead shows since I was 17 years old. This year I enjoyed five Dead & Company shows, even traveling to Colorado for two shows at Red Rocks. Dead & Company is the current incarnation of the band with original members Bob Weir, Bill Kreutzmann, and Mickey Hart plus John Mayer playing the Jerry Garcia role, Oteil Burbridge, and Jeff Chimenti. 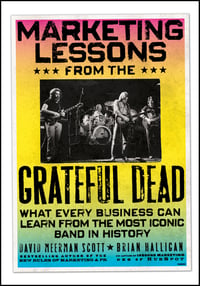 How much do I love the Grateful Dead? I wrote a book about them together with HubSpot co-founder and executive chairman Brian Halligan and NBA Hall of Famer Bill Walton who has seen over 800 Grateful Dead shows(!). Marketing Lessons from the Grateful Dead: What Every Business Can Learn from the Most Iconic Band in History. Digging into how the band marketed to fans was a fun project!

I’ve managed to slip Grateful Dead stories and references into each of my 12 books and most of the 500 or so talks I’ve delivered around the world. And I frequently blog about some aspect of the band. 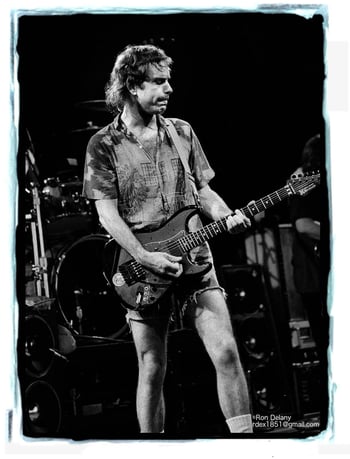 This year I took my extreme fandom even further. I purchased a guitar that Bob Weir played at nearly 100 Grateful Dead shows in the 1980s. The Modulus Blackknife guitar is named “No Fun” because of the sticker that was added to the guitar in mid 1984.

I’ve done a ton of research on the guitar in the past few months. It was first used by Bob Weir on October 11, 1983 at a Grateful Dead show at Madison Square Garden.

In a simple twist of fate, I was at that 1983 MSG show! I had graduated from university that year and was living in New York City.

Based on hundreds of photos I’ve found, the No Fun Modulus Blackknife guitar was a go-to instrument for Weir from 1983 through 1985, played in nearly 100 shows.

I had a wonderful opportunity to speak with Geoff Gould who was the founder and first CEO of Modulus, a maker famous for being the first to make graphite neck guitars. Geoff and I exchanged notes and among other things discovered that other well-known guitarists including Joe Walsh played No Fun on stage.

No Fun was played by Bob Dylan when he sat in with the Grateful Dead for three songs on July 2, 1986 at the Rubber Bowl Akron, OH: Little Red Rooster, Don’t Think Twice, It’s Alright, and It’s All Over Now, Baby Blue.

Interestingly, both of my Marketing Lessons from the Grateful Dead co-authors have veered into this aspect of extreme fandom. Brian Halligan owns Jerry Garcia’s Wolf, one of the most famous guitars in the world. And Bill Walton owns percussion gear from Mickey Hart.

I didn’t buy Bob Weir’s guitar to put it away. I want to share it with musicians who perform Grateful Dead music and have the guitar appreciated by those in the audience.

A post shared by Bob Weir's No Fun Guitar (@nofunlive)

Last week, No Fun was played on stage for the first time in more than 30 years when I shared it with the members of Dead Set for their show at Nectar’s in Burlington, Vermont.

Having the guitar as part of the show steps up everyone's game including the fans who loved the experience.

Zach Nugent worked on No Fun for several hours prior to the show, getting it back into tip-top shape. During the show, Zach and Joe Agnello played No Fun and did the instrument proud. It was so much fun to watch them in action.

I just started an Instagram for No Fun @NoFunLive. I’m looking forward to documenting it’s exploits in the coming years!

Are you cultivating your extreme fans?