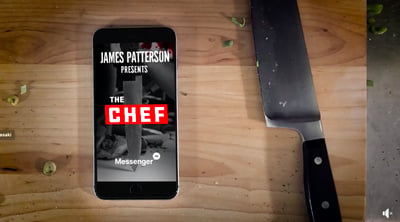 James Patterson, one of the most successful authors ever, has always been clever with the way he markets his works. And that makes sense because early in his career he worked in advertising. For his new thriller The Chef Patterson cast actor Cory Tucker in the lead role of Detective Caleb Rooney for a social media reality experience available on Facebook Messenger and Instagram, blurring the lines between fiction and reality.

Tucker (Transformers 3: Dark Side of the Moon, NCIS, True Blood) is featured in photos and videos, bringing The Chef to life in app-based storytelling. Facebook Messenger allows people to jump into the book's New Orleans-set story line and engage with characters, locations and clues via interactive video and sound clips.

Patterson, who has more than 3.4 million followers on Facebook, said in a statement, "Ten years ago, if you told me I'd see one of my novels come to life through scrolling chat bubbles, video and audio content, I would have laughed. But exploring new ways to connect with fans is important to me and [Facebook] Messenger's experience for The Chef not only makes the story more accessible to readers across new generations, but offers an enticing and thrilling read like never before."

Acting in a world of web video 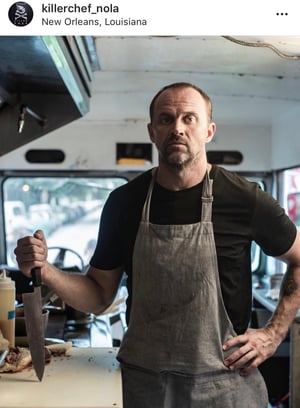 For an actor like Cory Tucker, a project like this represents the possibility of new ways to get acting work. “With James Patterson being involved and Facebook being involved it would have been a bad move not to do it,” Tucker told me in a telephone interview. “And Detective Caleb Rooney turned out to be a really great character.”

As television morphs and changes with many people watching on mobile devices, there's bound to be more opportunity with online films for actors like Tucker. “With the coming of age of the internet we are going to be seeing more of this,” he says. “As an actor you get onboard or you get left behind. I just worked on Apple's upcoming web television drama series The Morning Show, along with Reese Witherspoon, Jennifer Aniston, Steve Carell, and Billy Crudup. A lot of people are falling in line and it all started with Netflix.”

The Chef Synopsis: In the Carnival days leading up Mardi Gras, Detective Caleb Rooney comes under investigation for a murder he is accused of committing in the line of duty--as a Major Crimes detective for the New Orleans Police Department. Has his sideline at the Killer Chef food truck given him a taste for murder? While fighting the charges against him, Rooney makes a pair of unthinkable discoveries. His beloved city is under threat of attack. And these would-be terrorists may be local.

It will be interesting to see where this approach might lead in the future.