“Benefits, Not Features” Is the Wrong Way to Market 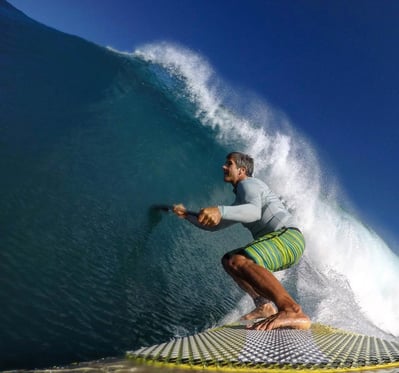 As a young marketer, I was always taught: “Write about the benefits of your product, not the features.”

The problem I have with the “benefits” approach is that when told to write about benefits, nearly every marketer on the planet simply reverse-engineers product features in order to make up benefits.

Almost nobody does the work required to truly understand buyers, their problems, and the language that buyers use to describe their problems.

If Nick Woodman had simply used the “benefits, not features” approach when talking about his new camera with a waterproof housing back in 2004, he would have used language like “you can protect your camera while it is in the water.” That’s exactly what every other camera manufacturer did when discussing their waterproof camera or housing.

You can't make this stuff up

But when I interviewed Nick, he told me he did much more than make up benefits. He interviewed surfers on the beach in front of their surf breaks to learn about how they surf and their problems around shooting photos in the waves. Surfers described the challenge of paddling into a wave with a camera, standing, getting into balance and trim, and then only having a second to take a photo. It was way too awkward with the cameras that were on the market at the time.

Woodman learned it wasn’t the benefit of "protecting my camera in the water" but rather the specific challenges of “how can I take photos while surfing" that were key.

Soon Nick and his team were interviewing other adventure sport enthusiasts like mountain bikers, kayakers, and rock climbers and creating marketing that targeted each of these groups.

A decade after launch of the first GoPro, the company grossed $1.6 billion. Their success did not come from talking about benefits. It came from understanding buyers.