The Savannah Bananas baseball team absolutely puts fans first. So much so that my friend, the Banana’s owner Jesse Cole, just announced that his team will leave the Coastal Plain League to exclusively play its own version of baseball called “Banana Ball”.

“The decision to go to Banana Ball full time was the most fans first decision we’ve ever made,” Jesse told me. “Every rule was created for the fans. Walks are boring, so we eliminated them and made them sprints. Batters stepping out of the box slows down the game, so we eliminated that. Walk off wins are the most exciting play in baseball, so we made every inning count to make walk-offs possible every inning.” 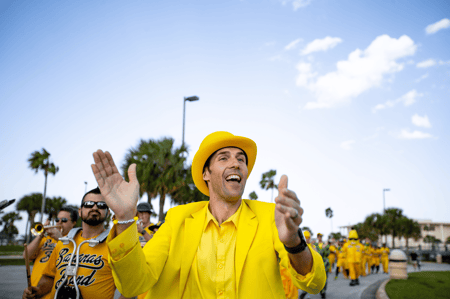 The Savannah Bananas on TikTok have over 3 million followers, more  than any Major League Baseball team.

Every game is a sellout and there is an 80,000 person waiting list to get tickets.

And then there is my favorite rule that makes fans active participants in the games: When a fan catches a foul ball, the batter is out!

“The two-hour time limit was huge as well to help create fans,” Jesse says. "Five years ago we started taking pictures and videos of our grandstands every 30 minutes during a game and watching when fans would get up and when they would leave. We found that most fans were leaving two hours in. So, we made the decision to test a two-hour game.”

Here’s a Los Angeles Times article that provides details on the rules of Banana Ball. What is Banana Ball? Here are the Savannah Banana rules of the game

The strategy that Jesse has used is something that any organization can learn from. Putting fans first means paying attention to all aspects of your business and challenging all the ways that you’ve worked in the past.

“Fans were disappointed when they saw us play a traditional game so we went all-in on our own game and now will only play Banana Ball!,” Jesse says. “With a waitlist for tickets, we now we have freedom to schedule year-round and play more places to help take care of more fans!”