On August 15, I attended a Donald Trump MAGA rally in Manchester, New Hampshire. I witnessed massive Trump fandom in action and I wrote about the marketing aspects of the  event. Several weeks later, in the exact same venue, I attended the New Hampshire State Democratic Convention (as an independent guest, I am not a member of a political party). At the DNC event, 19 candidates for president addressed the gathering. It was fascinating to see fans of the various Democratic candidates as passionate as Trump’s fans.

Just like the Trump rally, candidates came sporting the gear of their favorite candidate. It seemed to me that the most coveted item that day was the Andrew Yang MATH hat.

Trump’s red hats have become iconic. The acronym for Trump’s “Make America Great Again” slogan is MAGA, so Yang’s play on that is a blue MATH that stands for, well, math “celebrating numbers and facts an essential part of our campaign” (sic).

Inside the arena, fans cheered for their favorite candidates, but I had a sense that people were very supportive of all of the candidates. Four years ago, when I attended the same gathering it was a different story. In 2016, Sanders’ supporters booed Clinton and many walked out of her speech. This cycle there was unity in New Hampshire. 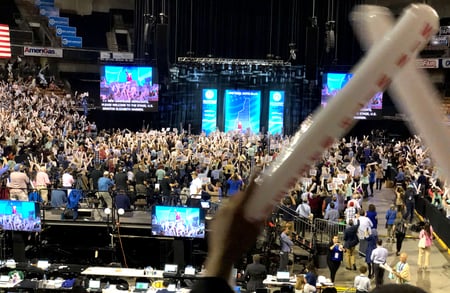 The biggest cheers came for Warren who received a two-minute standing ovation as she walked into the arena. It reminded me of the greeting Trump received when he arrived in the same venue a few weeks earlier.

Once the Democrats coalesce around one candidate, I predict there will be many vocal and supportive fans during the general election which will make for a fascinating general election cycle leading up to November 2020.

Important note: This is a marketing blog, not a political blog. I am not commenting on any candidate’s views on the issues nor am I publicly supporting any candidate. I write about the US Presidential election because it is a massive marketing case study playing out for several years, not because I voice my support for any candidate over another or one party over another. Please note that as an independent voter, I attended the New Hampshire Democratic Convention as a guest.